After nearly a year of business, Wild Card Brewing Company continues to serve the community with ice cold favourites.

At just 24 years old, Nate Card convinced his parents it would be a good idea to purchase a local brewery. A native to Napanee but now living in Wooler, Card began working at Gateway Brewing Company part-time during his second last year of university. He said that, “this job really got me into craft beer.” From that point on, he said he knew he wanted to work in the craft brewing industry.

“I knew I wanted to do something. I thought about doing the cicerone course, which is like the equivalent to a wine sommelier, but for beer.”

Card said while he was writing his last exams that year, the former owner of Gateway called him and said the business was up for sale. A week later, the business was in jeopardy of shutting down unless it was sold.

“I spoke with my parents about [buying] it,” said Card. “I was 24 at the time and knew I was young enough I could go back to school. We ended up buying it, signed an agreement at the beginning of May. The sale was finalized September 21 [of 2015].” 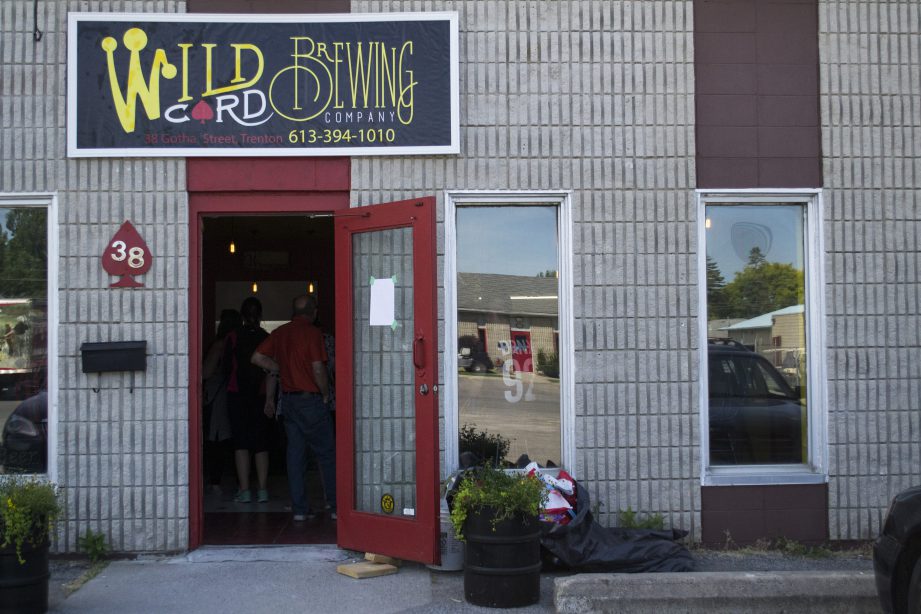 Card said once he took over as general manager of Gateway, he immediately shifted the business in a direction he wanted it to go. It was re-named Wild Card Brewing Company, named after a family boat. Card said he was excited about building Wild Card’s own reputation in the community.

“I wanted to make sure [Wild Card] had a good reputation in Quinte West. I wanted people to look at us and say ‘they are the ones that held fundraisers at their brewery and threw events for charity and attended all of the events.’ I really want Wild Card to be something people look up to in the community.”

And he is working on doing just that. With only a year under its belt, Wild Card has attended several events in Quinte West, such as the Big Band Festival and Wheels on the Bay, as well as several craft beer festivals throughout Belleville, Kingston and Peterborough. Wild Card beer can be purchased directly from the store, but can also be found in Tomasso’s Italian Grille, The Port Bistro, The Celtic Pub, L’Auberge de France in Quinte West and Belleville, and Sans Souci in Belleville. Card said he wants to keep expanding, and hopefully end up in The Beer Store soon.

He said he loves the relationship he has built with business owners and members of the community:

“I walk into a restaurant and people know who I am because we have built that relationship. People will stop me when I’m doing deliveries and say ‘we love your beer’ and it feels really good to establish that connection with people.”

Card said he never thought about taking the business out of Quinte West. “I love the city; I think it has a lot to offer… I consider myself an unofficial tourism ambassador because of how much I promote the city to the people who come into my store.”

Staying local wasn’t just important for location, but also for the ingredients used for his product. He’s even making a special craft beer for the Eastern Ontario Local Food Conference made from entirely locally grown ingredients.

“My goal is to use ingredients that are within 40 kilometres of the brewery,” Said Card. He said he uses special ingredients for some of the beers, but the majority of the ingredients are all locally sourced.

Card said his passion for local business started when he was around 14. “A major retail store opened up in Napanee, and started pushing a lot of smaller shops out of business. One jewelry store stood up and didn’t close down, and now they have expanded. When I lived there, I never really thought it was all that special, but now I always tell people to visit Napanee.”

Card said he wants his brewery become a place where, “people can come and hangout with their friends without yelling over loud music and just drink some craft beer.”

The brewery recently hosted a small painting class, and Card said come the fall, he wants to continue hosting events like this as well as to try and craft a new beer each week while keeping some fan favourites.

“Beer is the absolute most complex drink on earth… There are no limits. We try new things all the time, some work and some don’t.” Card said some of his favourites were created by his brother, who he said he wouldn’t classify as a beer drinker. “It’s cool to see someone so passionate about craft beer that doesn’t regularly drink it.”

Wild Card Brewing Company recently hosted a small community event at their store that around 200 people attended. Card said he wants to host more events like this, so the community can come out and enjoy the different vendors, talent and craft beer in Quinte West.

For more information on the brewery, you can visit them at 38 Gotha Street, Trenton, or call them at 613-394-1010. This article originally appeared on quintewest.ca