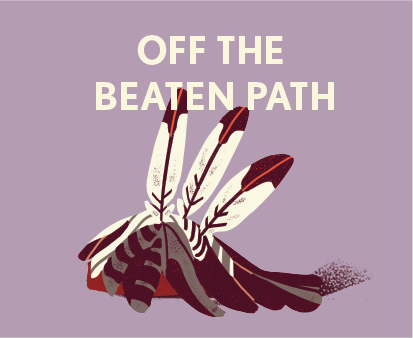 The Tyendinaga Mohawk Territory, as part of the Mohawk Nation, is a healthy, sustainable Kanyen’kehà:ka community, built on and united by their language, culture, traditions, knowledge and history.

Christ Church Cemetery – Look for the plaque near Dr. Oronhyatekha’s (Burning Sky) grave; among other incredible feats, he was one of the first accredited Indigenous doctors in Canada and the first-known Aboriginal Oxford scholar.

Pet Cemetery – Follow the path to the right behind the Christ Church Chapel and continue past the clearing. When you see the foundation of the old rectory, keep going roughly 80ft. Here lie the beloved pets of Reverend Herbert Pringle, who served this congregation from the 1920’s to the 1940’s. Scottie, Toby, Sultan and Chippie are remembered with personalized and professionally commissioned headstones.

Millside Ceramics, Marleen Murphy creates pieces using traditional Mohawk colours and images. It’s no surprise that her work was chosen to represent Canada at the 2010 Winter Olympics in Vancouver because each piece is an opportunity to learn about an incredibly artistic Indigenous culture.

The Gallery Cafe for traditional fare like corn soup and cornbread, or the fan-favourite daily quiches.