We are closely monitoring the current events that are causing significant challenges to the tourism and travel industry in the Bay of Quinte region. Visit our COVID-19: Resources for Tourism Businesses page for a list of resources and please feel free to contact us with any questions. 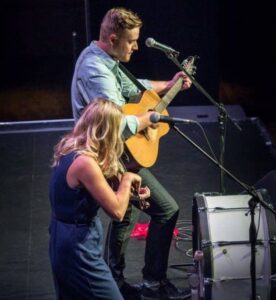 Express and Company on the Patio

We’re happy to have Melissa and Dylan back to church and socially distancing making music on our patio.

Express and Company is a folk/pop duo from Peterborough, Ontario. The band is fronted by Dylan Ireland and Melissa Payne and formed in 2013. Since then, the band has been on an impressive rise.

They’ve toured Canada travelling as far afield as the Yukon and PEI, appeared at South By Southwest in Austin, Texas. Aside from touring they have won both the Peterborough Folk Festival and Mariposa Folk Festival Emerging Artist awards.

In 2013/14 they reached the number one spot on the CBC R3-30, CBC Radio 3’s nation-wide indie music countdown, for the song “Carry Me Along” off their debut album, ‘Ontario’.

“Carry Me Along” was then added to CBC Radio 2’s national broadcast spending 14 weeks on CBC Radio 2’s Top 20. Express and Company is now writing and recording their sophomore release due in 2020.