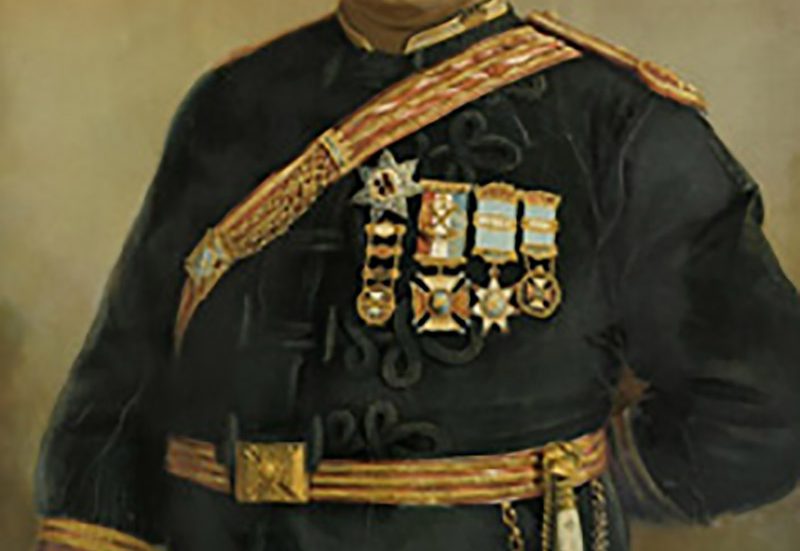 During his early years, Oronhyatekha was educated in the Mohawk language and learned to appreciate the ideals of Mohawk culture and customs. He then attended the Mohawk Institute in Brantford, a residential school where he learned to read and write in English and was trained to be a cobbler. It was a miserable beginning, and as luck would have it, an American phrenologist (a reader of bumps on a person’s head), pronounced Oronhyatekha “educable” [sic] and accompanied him to the United States where he enrolled in college.

This was a perilous undertaking for Native people during this time as higher education beyond the residential school experience and prolonged absences from the community were grounds for loss of status as a Native in Canada. However, Oronhyatekha negotiated his way around these obstacles. He returned home between semesters and taught in day schools at Six Nations until he graduated from Kenyon College, Ohio. It was here that he demonstrated a “photographic memory” and completed his four-year program in three years. To support himself he took up acting and became a fairly successful stage actor during this time. 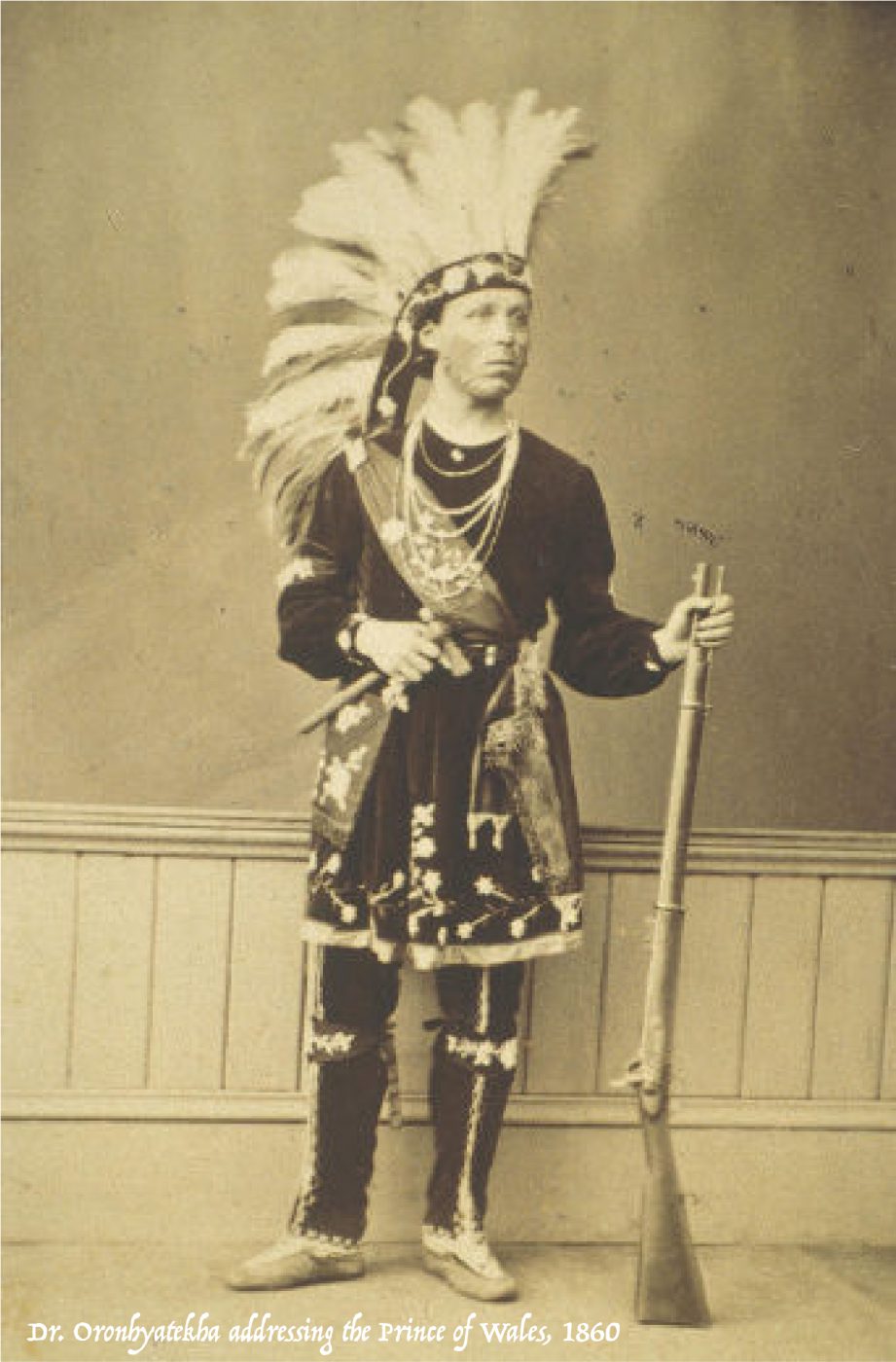 Oronhyatekha then returned to the Six Nations Territory and resumed teaching. In 1860, he experienced an event that would change his life forever. The Prince of Wales visited Canada on the first official Royal Visit and the Six Nations Confederacy Council selected Oronhyatekha to deliver a Welcoming Address to the young Prince (who went on to become King Edward VII). At six foot three, Oronhyatekha struck an impressive pose, and so impressed both the Prince and his attending physician, Sir Henry Acland, that Prince Edward suggested that Oronhyatekha should study at Oxford University, England. In 1862, Oronhyatekha accepted the invitation and became the first Native person in Canada to study at Oxford. Sir Henry Acland became a lifelong mentor and friend of Oronhyatekha.

This accomplishment was short lived, as Oronhyatekha did not obtain permission to leave the reserve nor to attend Oxford, and was called back to Canada. He did not return to Six Nations and chose instead to settle at Tyendinaga Mohawk Territory at the Bay of Quinte. This community was not unknown to him. His mother’s family resided here as well as an older brother, Jesse P. Martin, who had also married a member of the Mohawks of the Bay of Quinte.

Soon after arriving at Tyendinaga Mohawk Territory, Oronhyatekha met and on August 28, 1863, married Deyoronseh (The Pretty One) also known as Ellen Hill, a member of the Mohawks of the Bay of Quinte. Together, they established their home at Tyendinaga Mohawk Territory, a home called “The Pines”. Oronhyatekha had decided to pursue a career as a medical doctor and enrolled at a medical school affiliated with the University of Toronto. He graduated with his medical degree in 1866, one of the first of Native ancestry in Canada to achieve this and in 1876, was granted a license to practice “Physic Surgery and Midwifery” from the newly formed College of Physicians and Surgeons of Ontario. 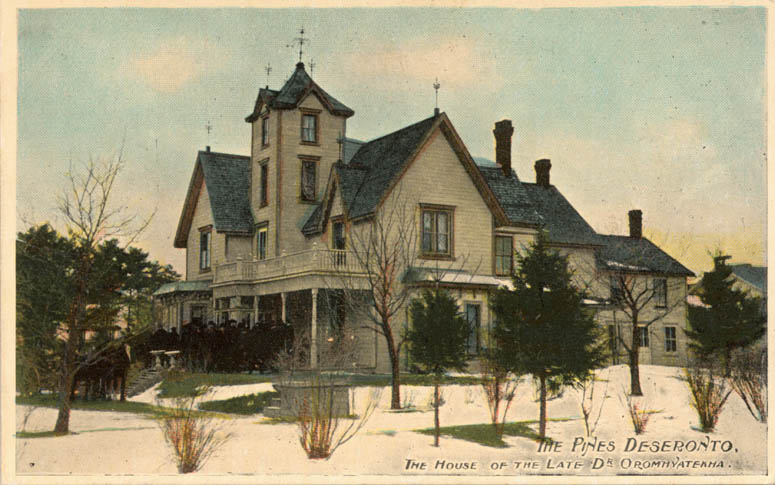 Dr. Oronhyatekha went on to establish a practice first in Frankford, and later Napanee and London, Ontario. He became a successful physician. However, he would suffer personal tragedy and loss. Dr. Oronhyatekha and his wife Deyoronseh would have seven children, but only two would survive to adulthood. While several children died in infancy, Henry, only ten years old at the time, died in a tragic boating accident in London, Ontario in 1881. Deyoronseh had taken Henry and her two younger children, Acland and Karakwineh, also know as Bena, on a ferry during Victoria Day festivities when the overloaded vessel capsized. Deyoronseh managed to save the two younger children but Henry drowned. It was said that she never fully recovered from this tragedy, returning to “The Pines” in Tyendinaga Mohawk Territory with her two surviving children and would rarely leave again. 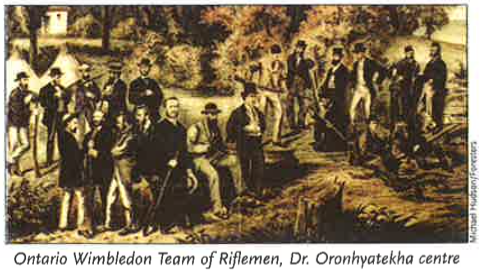 In 1871, Dr. Oronhyatekha earned nine medals for marksmanship at the Wimbledon Shoots, England. In the 1870’s Dr. Oronhyatekha, while continuing his medical practice, had begun to take on other interests. He cultivated his work with fraternal organizations popular during the Victorian era and quickly rose to highest ranks of the Masonic Lodge, the Good Templars, and the Orange Order. He began to involve himself in politics, and in 1872, became the Chairman of the Grand Indian Council of Ontario and Quebec. That same year, he campaigned for the Conservatives in Walpole Township. While little hope existed for the Conservatives to win this riding, they won and Oronhyatekha was largely credited. In 1873, Oronhyatekha took the position of consulting physician at Tyendinaga after being recommended for the post by Prime Minister Sir John A. Macdonald.

Over the next few years, Dr. Oronhyatekha maintained and expanded his network of influential people, and made frequent visits to England where it is said he became a fixture in the Court of Queen Victoria. While in England, Dr. Oronhyatekha became interested with the history of the Coronation Chair, He obtained royal permission to have it replicated and it became part of his collection of rarities.

In 1878, Dr. Oronhyatekha joined the fledgling fraternal insurance company, the Independent Order of Foresters (I.O.F.) at London, Ontario. It was a struggling organization at this time, but by 1881, Dr. Oro 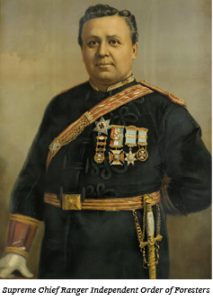 nhyatekha would become its chief executive officer, the Supreme Chief Ranger, a position he held for 26 years, until his death in 1907.

From these difficult beginnings, he would lead the I.O.F. to become one of the largest of fraternal insurance companies in Canada, and he would establish it as an international order, he expanded its membership to include children and women, a success that would take him ten years to achieve. He owed his success to the idea that insurance should be available to the average working man at an affordable price. To protect the company, he introduced the medical examination as a prerequisite to qualify for membership. Under his direction, the I.O.F. provided security and a social safety net to families when virtually none existed elsewhere. 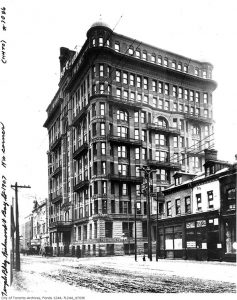 Dr. Ohonhyatekha was more than a director of a hugely successful insurance company; he was also a builder. The Temple Building, the world headquarters of the I.O.F., was constructed at the corner of Bay and Richmond Streets in Toronto, establishing Bay Street as the financial centre of Canada. It was the “tallest building in the British Empire” at the time of its completion in 1898. The cornerstone was laid on May 30, 1895, by His Excellency the Earl of Aberdeen, the Governor General of Canada. It was in the Temple Building that he opened the “Oronhyatekha Historical Rooms and Library” in 1902. His collection of over 800 artifacts and natural history specimens from around the work that he had amassed during his lifetime of world travel were exhibited in one of the very first private museums in Canada. This collection became the founding collection for what would later become the Royal Ontario Museum, Toronto, Ontario.

At Tyendinaga, his home “The Pines’ had become a palatial Victorian estate, complete with a live exotic animal collection. Few visitors from outside the community would come here, as he permitted only the Mohawk language to be spoken in his home. His other home, “The Castle”, was on Captain John’s Island, also known as Forester’s Island, in the Bay of Quinte across from Mill Point, now known as Deseronto. It was here that he entertained international guests and dignitaries, and offered a place for recreation for members of I.O.F. The building he considered his greatest achievement was “The Orphanage” also located on Forester’s Island. 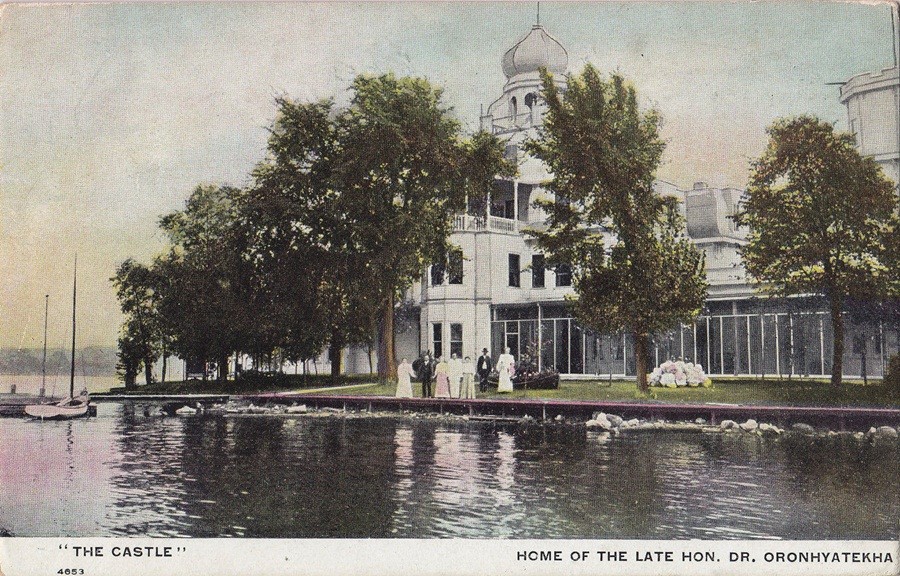 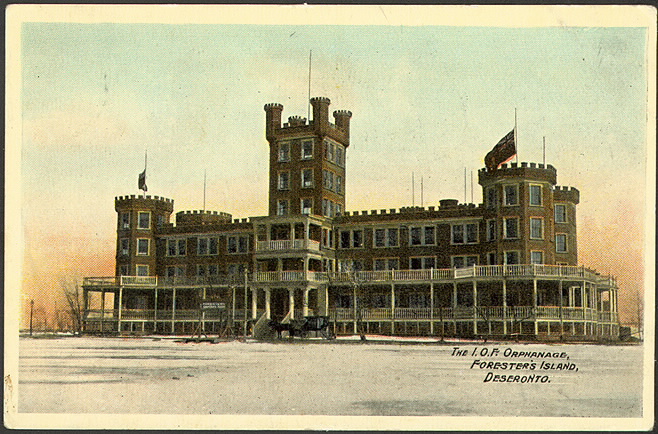 Dr. Oronhyatekha’s wife, Deyoronseh, died May 28, 1901, shortly after the death of this lifelong friend and mentor, Sir Henry Acland. Following Queen Victoria’s death in 1901, Dr. Oronhyatekha attended the 1902 Coronation of King Edward VII. His health had begun to fail, and he suffered heart complications brought about by the ravages of diabetes. He was advised to go to Sanannah, Georgia early in 1907 and under that advice, traveled to the warmer climate. On the train ride to Georgia, Dr. Oronhyatekha stopped in Washington, DC to pay a visit to his friend, President Theodore Roosevelt. Dr. Oronhyatekha died in Savannah, Georgia on March 3rd, 1907. 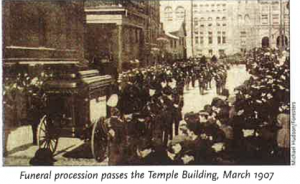 In Massey Hall, Toronto, Dr. Oronhyatekha lay in state and was given a full state funeral, the likes of which few have ever witnessed. Thousands of people lined the streets of the funeral route. At Tyendinaga his casket was carried from “The Pines” by pall bearers of the Mohawks of the Bay of Quinte. 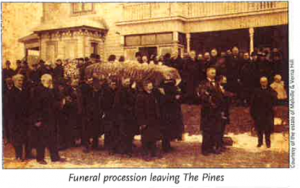 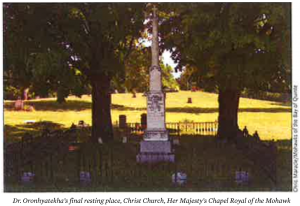 Dr. Oronhyatekha had met royalty, the Emperor of Japan, presidents and prime ministers. He was a Justice of the Peace and an ambassador for Canada. During his lifetime and years later, his efforts and successes had profound effects on the social and economic policies of Canada at the time of its greatest changes and growth. In 1957, the memory of Oronhyatekha was honoured with an Ontario Historical Plaque at his final resting place at Christ Church, Her Majesty’s Chapel Royal of the Mohawk, Tyendinaga Mohawk Territory. On August 21, 2005, he was recognized as a Canadian Figure of National Historic Significance with a plaque erected by the Historic Sites and Monuments Board of Canada.

Perhaps his greatest achievement is that his legacy forms a large part of the history of the two communities with which he is most closely associated, that of the Six Nations of the Grand River and Tyendinaga Mohawk Territory. Dr. Oronhyatekha remained true to his heritage, his language, his culture and to his people throughout his lifetime.

The career and life of this remarkable man in Canadian history can best be summed up in his own works. Oronhyatekha was once asked why he preferred to use his Mohawk name rather than his English name. His reply was simply: “There are a thousand Peter Martin’s, but there is only one Oronhyatekha.”

To commemorate Dr. Oronhyatekha’s life and contribution to society, a “Dr. Oronhyatekha Memorial Education Scholarship Fund” has been established to provide scholarships for status Indian students enrolling in a Canadian medical school. 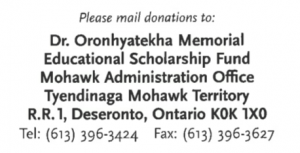