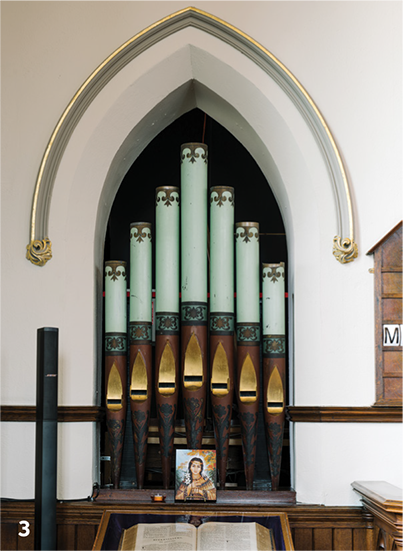 ON A QUIET country road winding down to the shore of the Bay of Quinte sits a structure unique to the area and, in many ways, the world.

Christ Church, Her Majesty’s Chapel Royal of the Mohawk, is of great historical significance to the Mohawk people and to the colonial history of Canada, explains Chief R. Donald Maracle on a rainy Monday afternoon. It is one of only six Royal chapels outside the United Kingdom, and one of two in Canada (the other is Her Majesty’s Royal Chapel of the Mohawks near Brantford, Ontario). It was designated a National Historic Site in 1995 and still hosts a congregation for worship and fellowship every Sunday morning in addition to being an open space for special events, tours, and concerts.

Christ Church was built by the Mohawks themselves in a simplified Gothic Revival style in 1843. Religion and a deep belief in God was not foreign to the Mohawk people. Entrenched in the Long House tradition was a great reverence for the Creator and for the gift of life. Pursuit of peace, democracy, and the realization of good and evil made it easy for the Mohawk people to accept Christianity.

There is a wealth of history around Christ Church as it relates to the American Revolution. Many Mohawk people, as military allies of the British Crown throughout the revolution, were proud of their status and designation as United Empire Loyalists. While Loyalists settled around the Bay of Quinte and in Prince Edward County, Mohawks who were relocated from their indigenous lands were provided lands in what is now Tyendinaga Mohawk Territory; they were known from then on as the Mohawks of the Bay of Quinte. After the revolution, Mohawks continued to volunteer alongside His Majesty’s troops in unprecedented numbers in comparison to their population during the War of 1812, the Great War, and the Second World War. 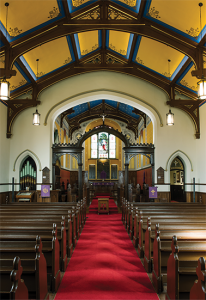 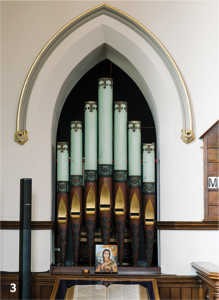 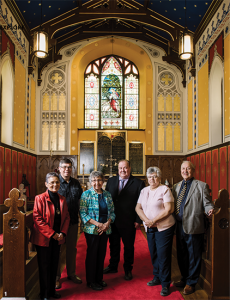 When inside the Chapel, it is hard to miss the attention to detail with which this structure was built and just as importantly restored and maintained by the members of the Christ Church Chapel Royal Restoration Committee. Pictured above from left are: Shirley A. Maracle, Charles Maracle, Edith Green, Chief R. Donald Maracle, Wilma E. Maracle and Elmer Maracle. Absent members are: Dan Whalen, Delores Maracle-Whalen and Gail Clement. 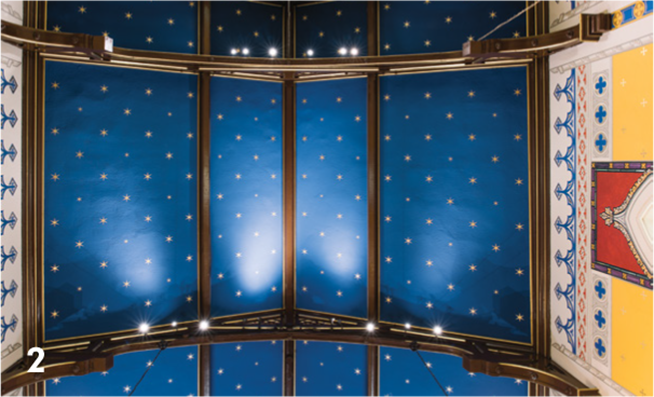 The ceiling is a sight to see with 18 Karat gold stars signifying the celestial heavens and the rare, 1-manual, 7-rank Karn Warren organ with a print depicting St. Kateri Tekakwitha — the first Native American to be recognized as a saint by the Catholic Church. Royal Gifts are on display at the Church and include a triptych of The Apostles Creed, The Ten Commandments, and The Lord’s Prayer in the Mohawk Language, as well as a bell given by King George III.  Coat of arms given by King George V, communion chalice given by Queen Elizabeth II and the historic Queen Anne Communion Silver.

The chapel also houses a memorial window given by Dr. Oronhyateka, one of the earliest academically accredited Native American medical doctors, a graduate of the University of Toronto and Oxford University in England. The doctor is buried at the Royal Chapel.

Rooted in history and a pillar in the community, the Christ Church is a stunning and unique place to worship and explore.

Go Face-to-Face with Dinosaurs at the Quinte Museum of Natural History November 15, 2022