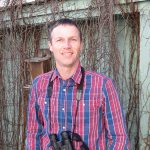 Thanks for taking the time to read my monthly Bird Blog!  This is the first of my monthly blogs for Bay of Quinte Regional Marketing Board, where I’ll write about my nature walks, and give you a perspective of the Quinte area through the eyes of a birdwatcher.  There’s much see and do. Please enjoy!

An Evening Stroll Along The Riverside Trail​

It has been another hot and muggy July day.  As the sun begins to set, I’ve come to Belleville’s Victoria Park to enjoy the cool evening air and walk north along the Riverside Trail.  Out over the surface of the Bay waters, I watch cormorants form serpentine-like lines as they fly towards Snake Island, and the gulls make their southward commute high over the shop tops of Downtown Belleville.​

As I walk upstream past Belleville’s City Hall, I spot a few lazy Mallard ducks seeking some rocky bit of real estate on which to establish themselves for the night. A large black and white raptor is making his way upstream, fresh fish in his talons.  It’s an Osprey.  I’ll follow him. I know where he’s going.​

Above me the Chimney swifts are starting to chitter chatter, racing to fetch a final mouthful of insects before nightfall.  For a species that has seen it’s population decline by 90% over the past 50 years across Canada, it’s nice to see a few of them still nesting in Belleville.​

My attention is now taken by the explosive rattling call of a kingfisher darting downstream.  She zips past a pair of Great Blue Herons that have set down along the river for a meal of minnows,  while next to them a weary Canada Goose has flopped down like a wet dog on the rocky river edge. ​

The Trail now does a double dip under the bridges of Front Street and Pinnacle Street, where I hear the coo-coo-cooing of pigeons echoing cave-like under the rumbling of the steel beasts above.​

A family of Common Mergansers have spotted me.  Mom is leading her brood swiftly away from my approach, with one duckling lagging, struggling awkwardly to catch up.  Eventually he gets back to his place in line behind his siblings.​

Not far away, on the opposite shoreline, a Black-crowned Night-heron has almost alluded my sights.  These herons are not often seen along the Moira River in spring and early summer, choosing to nest secretly elsewhere in the Quinte area, but a few of these stocky black and white herons appear in late summer, sometimes accompanied by their brown plumaged young.​
The Chimney swifts are really moving about now, much more quickly and frenzied,  as I make my final approach to Lions Park on Station Street.  They are likely looking to roost somewhere close by, perhaps in the isolated brick chimney which remains on the abandoned lot across from Historic Meyers Mill.​
There’s my Osprey.  It’s been a noisy reunion with his young family.  Alighting on his nesting platform, he’s begun to deal out his dinner of Bay fish to his two flightless offspring.​
My walk now over, I realise it has been quite a rewarding wildlife experience, despite my city surroundings.​

I’ll come back another evening.  Maybe I’ll see you there.​

“Tom’s Birding Tip of the Month​” — It’s hot out there, even for the birds. Remember to fill your bird bath daily.​