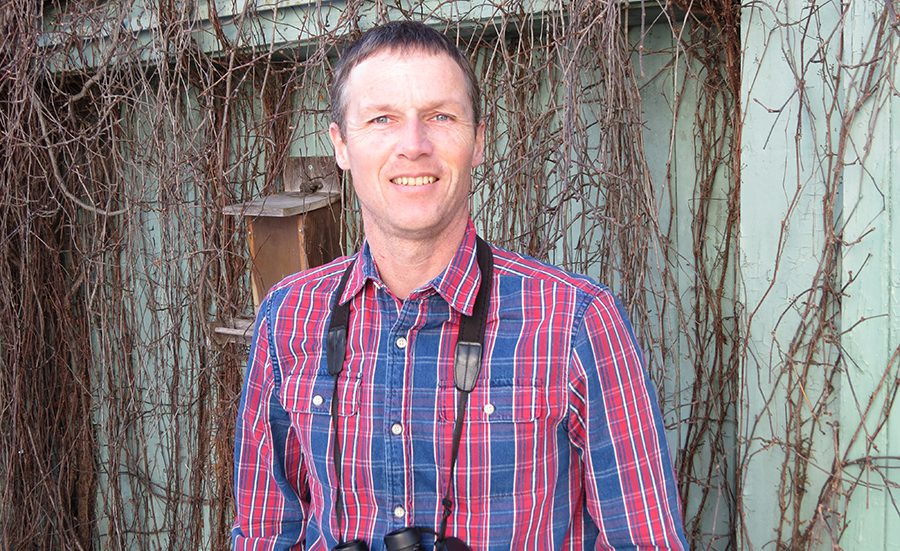 I HAVE ALWAYS HAD A KEEN INTEREST in the natural world, but it wasn’t until about ten years ago that I first started taking a serious interest in one particular group of animals—birds.

We have a great diversity of natural habitat around the Bay of Quinte region, and with that comes an interesting range of bird species. From the stately bald eagle to the delicate hummingbird, the dull browns of the flycatchers to the bright colours of the wood-warblers, there is much to appreciate. One of my first experiences of birdwatching with a group was with the Quinte Field Naturalists. Early one spring morning, we stopped our car on the side of a road next to an area of scrubland. While listen-ing to the dawn chorus of birdsong for less than a minute, the group identified five different species of birds, without seeing a single one! Birdwatching has given me a greater understanding of the natural world, and a deeper appreciation for the importance of species diversity. Every creature matters.

During peak migration periods in early spring and late autumn, thousands of ducks can be seen staging in the west end of the Bay. A walk along the pier at Twelve O’Clock Point can be very rewarding, especially in late March or mid-November. Large rafts of redheads, goldeneyes and scaup congregate along the north shore. The smartly plumaged male hooded mergansers are the stars of the show, with their black-and-white crests, black backs and copper flanks. In summer, the hooded merganser breeds in our area near small bodies of water, using tree cavities, such as abandoned woodpecker holes, for nesting. The female lines the bottom of the nest cavity with her down feathers, and lays an average of ten to twelve eggs. Within a day of hatching, the ducklings are faced with the daunting task of hurtling themselves out of the nest down to the forest floor to join their mother, where together they will seek out water.

Since the banning of the pesticide DDT, the osprey’s population around the Great Lakes has made an impressive comeback. With the addition of man-made nesting platforms built specifically for the osprey, this raptor is now quite common along the Bay’s shore. It’s worth walking the section of Belleville’s Riverfront Trail near Memorial Park on Station Street, which hosts one of these nesting platforms. Over the years I’ve seen many successful pairs of osprey raise their young here. Throughout spring and summer, I enjoy stopping in to watch the daily activities of these birds. Typically, one parent will stay with the begging young close to the nest while the other parent goes fishing in the Bay.

In spring I like to wake up at dawn and sneak out to the H.R. Frink Centre to walk quietly along the marsh boardwalk. Many birds start to sing their morning hymns, proclaiming their nesting territories and hoping to attract a mate. Among the din of calling birds and frogs, the grunting call of the Virginia Rail is occasionally heard. Sometimes I’m lucky enough to catch a glimpse of this shy bird, and maybe capture a photograph. Resembling a small heron, the Virginia rail shows mostly orange body feathers and grey cheeks. Rails seldom fly, preferring to flee danger by running through the cattails and sometimes even using their wings to propel themselves under water.

One winter while hiking the Drumlin Trail at the H.R. Frink Centre, I heard an incredible banging noise penetrating the stillness of the forest. I thought it must have been a lumberjack waging his battles against some stubborn tree trunk, but when I snuck closer, a great black-and-white woodpecker appeared, and I watched as it bombarded a dead stump with its ridiculously large beak. The pileated woodpecker lives in our woodlots year-round, making its living seeking out grubs and insects in dead and dying trees and creating large nest cavities for raising their young. Woodpecker nest sites are often later used by other cavity-nesting species, including wood ducks and small owls.

Check back to our bayofquine.ca/birds page for monthly Birds of the Bay updates from Tom.