Touring downtown Trenton only gives a hint of the number of visual artists who work in the wider municipality of Quinte West. There is a scattering of art walls in numerous local business but no central gallery.

The support for the visual arts, however, is evident in the photographic mural by Chuck Street celebrating Trenton’s history including the airbase, and its past as Hollywood North. The mural is also a visual time capsule incorporating selected images of the past with donated present-day photographs of people the community in 2011. The mural depicts a strip of film rolling out of a giant movie reel. The thousands of pictures of the current population seen from a distance make up the landscape of buildings sky and water. It is clearly visible as you travel west across the Gateway Bridge on Dundas Street. If you are a first-time visitor, it is well worth pulling into the parking lot and getting a closer look just to see the intricacies of the images, even the locals often stop to reminisce over this huge community photo album.

Framed historic pictures are evident on the walls of several Trenton businesses including River Brake Café on Front Street. Next door at The Port Bistro Pub paintings on Barnboard by Brighton artist Myranda LaFrance line the walls. On Elgin Street an interesting interior design store called Wish Home Accents and Décor has walls full of paintings and prints which owner Diana Brant-Winkler buys from a Canadian online supplier.

At the Heritage Café in the old City Hall, the Trent Port Historical Society have hundreds of pictures from the Hollywood North era of Trenton 1917-1934 on display along with earlier historical artifacts. They also have a collection of paintings by the Rev. Bowen Squire, a keen artist and archaeologist, who researched the early Loyalist settlements in Prince Edward County and produced a series of painting based on his vision of the life of the early Loyalist Settlers in the late 1700s. 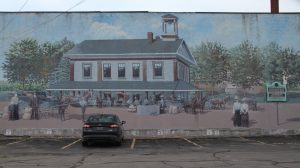 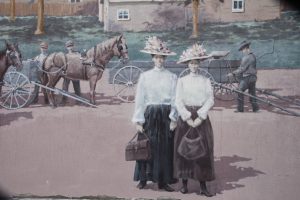 On the side wall of the Angelic Serendipity Spa building on King Street is a mural painted by Steven Snider in 1995 of an historic Market Day in Trenton. Sadly, deterioration of the wall and some vandalism has marred the image of this beautifully crafted scene. Discussions are currently being held at the municipal
level about the need to restore this and possibly other ageing murals. 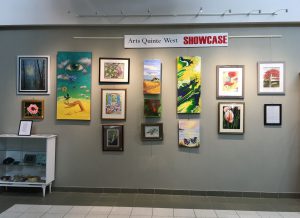 Studio B clothing store on Dundas Street has a great selection of women’s clothing and shoes but the walls are lined with paintings by the owner and artist Berney Goldberg. Across the road Bruinix Jewellers sells classic Canadian prints. The local Arts Quinte West association used to have a storefront gallery on Front Street but there were not enough volunteers among their 60 far-flung members to keep it open regularly. Instead their activities are now coordinated by Suzanne Andrews at the Quinte West Chamber of Commerce. They have a display wall in the foyer of City Hall next to the entrance to the library.

Veronica Leonard is a freelance writer living in Belleville who specializes in travel and wine tourism. Her blog can be found at The Wine Tourist.