Terry Arsenault worked in the solar industry for four years, installing systems, working in the shops, crafting devices and running shops. Born in Trenton, Terry returned to Quinte West 30 years ago to work. He noticed a gap in the energy market early on, and realized that solar is the answer to many of the problems the world faces today. With support from Trenval and the Small Business Centre, Terry was able to launch Solar To Go in 2015: a new business crafting solar panel tonneau covers for pickup trucks. 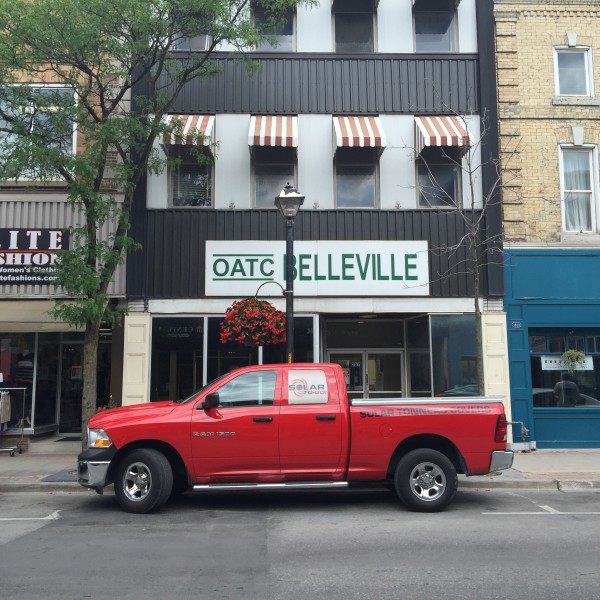 The mobile solar industry is fairly new – not many people are working in the industry yet, and even fewer around the Quinte area. In a region where outdoors activities like camping and RVing are popular, the question of hydro is an important one.

“People with campers and RV’s can hook it up to the camper and use the battery instead of a generator,” says Terry. “Beyond camping, it’s also very useful for contractors and other people who work outside. You can put a solar panel on a camper or trailer, but then you’d have to leave the camper out in the sun, making it uncomfortable to be inside of. When it’s on the tonneau cover, you can park the truck anywhere and keep it in the sun all day, plugging it in when you need it.”

The cost of a solar tonneau cover is very comparable to the cost of a regular tonneau cover and a generator. The difference is the absence of gas to make the generator run – if you’ve got solar, all you have to do is head back to the sun. Gas energy also ends up wasting a lot of fuel – with solar, there is no waste. 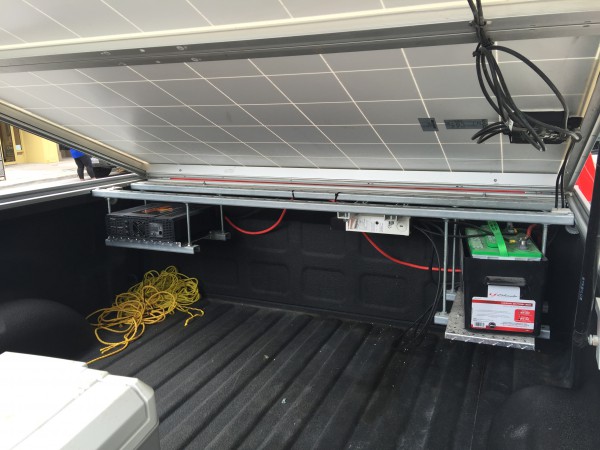 “The sunlight is going to hit the back of the truck whether there is solar there or not,” Terry commented. “You might as well take advantage of it wherever you can.”

In the past year, Solar To Go has set up at the Belleville Boat & Trailer Show, the Bay of Quinte Home Show in Trenton, the Havelock RPM Show, the Tweed Sportsman’s Gathering, and the Ottawa Boat Show.
At trade shows, the truck is set up with banners and the solar panel, but Terry says he continues to field questions about whether the truck itself is for sale. “It’s a very new concept that people are only just starting to realize,” he said. “The fact is, we’re past a critical state with pollution, but now we have to start correcting our way of doing things.”

With the truck bed real-estate available, if you’re going to have a hard topped tonneau cover, this is the way to do it.

“Even if you’re just driving across the country, you can power things like laptops and cell phones. Some trucks have investors built in that you can plug things into, but you have to have the motor running, or you’ll drain the battery. You don’t want to be running a 300HP engine to charge a cell phone. The tonneau covers are durable, I’ve had them on my truck for upwards of three years already.”

“20 years ago, you could look at the forecast for the weekend and it would be more or less correct. These days, it’s so unpredictable. We’re starting to create problems, and we have to start creating the solutions.”

For more information, find Solar To Go online at www.solar-to-go.ca