A few weeks ago Monika and I got the chance to head down to the Quinte Tennis Club and talk with their head manager, Mike Bowen, all about the club.

What I found to be most interesting about Quinte Tennis is the sense of community that it has. They have members that come from about an hour and 45 minutes away to play and others that bike there almost every single day. As a member, you’re trusted with the combination to the gate lock and to the door so you’re free to come and go whenever you please. Because of the standing lights surrounding the clay courts, the club is able to stay open until 10pm. You can book your court online to make sure there’s one available or just show up and hope there’s a court open. There isn’t somebody standing at a front desk looking over you the entire time, instead, it’s well run by club members. 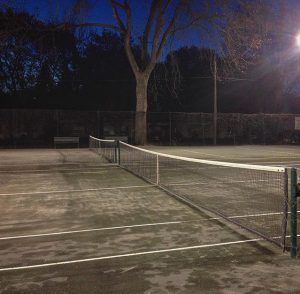 If you’re interested in getting started in the sport now is a perfect time! The Quinte Tennis Club just dropped their cost of joining to $100 for adults, $175 for couples and $200 for families.

Quinte Tennis Club also has numerous events throughout the year as a way to get the community involved in the sport. A few weekends ago was their big Canada Day open tournament, which had upwards of a hundred people come and play all forms. All the courts were booked for two weekends making it quite a successful event. Not only that but the club also just wrapped up their championship tournament where all of their members battled out to see who’s the best player with trophy’s being awarded to the winners.

Because The Quinte Tennis club is within driving distance from other clubs they’re able to organize tournaments against one another as well. This is done on a rotating basis so they’re always playing different clubs and having new people to compete against.

This summer the club ran a weekly half-day camp as a way to introduce more children to the sport. The kids came to the club to play games and learn about tennis while having as much fun as possible. The last week of camp just finished, so if you want to introduce a child to the sport be sure to keep an eye out on info for next summer.