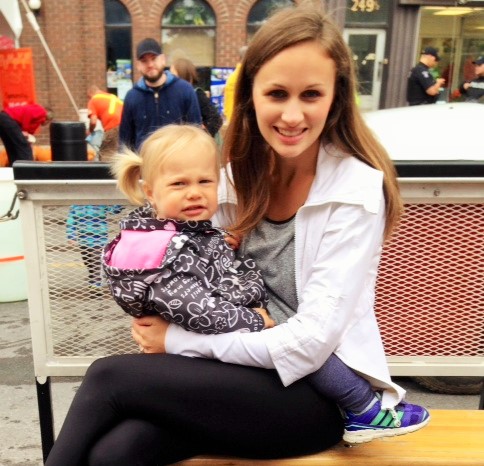 By Jim Barber
For Lesley Smith, as a place to raise a child, build a career and live an enviable, affordable and active lifestyle, there really is no place like home. She and husband Jamie had good jobs and lived in the large, vibrant, culturally rich metropolis of Ottawa and seemed to be living the dream.
But it also turned out to the be the expensive, congested, and overly busy city of Ottawa, and once the couple had their daughter Charlotte 19 months ago the appeal of living in the capital city of Canada, with all its excitement and variety of opportunities for entertainment, shopping and other activities was overshadowed by more practical and emotional factors.
In short, the Bay of Quinte Region and specifically Smith’s hometown of Belleville beckoned.
“We both had good jobs in Ottawa. He was working at Algonquin College teaching there and I was actually in a management position in the nursing department at Ottawa General Hospital. When a job opening came up at Loyalist College, kind of similar to what he already had, he applied and got it. And we asked ourselves if we were really going to leave what we had going in Ottawa and start fresh here,” Lesley said.
“It basically came down the fact that I grew up here and a lot of my family is here and my husband has some family here too. So, yes, family was part of it. We did love Ottawa, but it is really expensive. We were living in a townhouse, we both had good jobs and we had a little girl and so we wanted a single family home with a yard.”
The cost of housing, especially for a young family, was truly prohibitive in Ottawa and its suburbs, while affordable single-family dwellings are still very much within the means of many families, even those of more modest means than the Smiths.
“We were in Kanata and couldn’t afford to move. The houses we were looking at were probably close to $500,000 or more. We are pretty young still and just developing our careers, but based on the costs and what we were making it wasn’t in the cards to get the home we wanted for maybe another five to ten years,” she said.
“So we made our decision to come back here by looking at the local housing market. We just bought in Settler’s Ridge, just north of the 401 and we bought a house there that will be ready soon and it reminded us of the feel of the subdivision communities in Kanata, but it was a bigger house, in a nicer location for a lot less money.
“We might have been able to afford something similar in Ottawa now but it would have created so much financial stress and worry.”
Lesley managed to get a nursing position that is close to the same income level as she had in Ottawa, and is looking to move into the intensive care unit at one of the Quinte Health Corporation sites.
But there had to be more than simple economics to convince Jamie that the family should move. What clinched the deal was the plethora of amenities and cultural and entertainment opportunities that they could avail themselves of throughout Belleville and the broader Bay of Quinte region.

“There is a lot of culture here and in The County and the surrounding area. There is a lot happening here. And it’s also nice to only have to drive for a couple of minutes to get to the downtown farmer’s market and to shopping or restaurants. In Ottawa we would have to drive half an hour or more. And I love the new library in Belleville. I have been taking my daughter there a lot and they have great programs for families and kids of all ages. When I was younger and single a city like Ottawa would seem more attractive, but with a family it’s so much better here in Belleville and the Bay of Quinte area,” Smith said.
“And you are surrounded by water here and that is so important to us. Here along the Bay of Quinte, there are so many parks and beaches by the water. You have some of that in Ottawa, but they’re not always accessible. Here you can just hop in the car and five minutes later you’re there.
“And the thing is we can still go out and have a great meal and a glass of wine at a place like Capers and see some great music and theatre. And my husband can still play squash in a league and do all the other sports he likes.”
Smith said she is heartened, as someone born and raised in the area, to see the effort that municipalities such as the City of Belleville are putting into improving the overall quality of life for existing residents, new residents and those, like her family, who are choosing to return to the area.
“Folks are working hard to make it appealing for the kids who go off to university to want to come back. And that quality of life is bringing people like me back here. I know there are people putting a lot of time and money into the downtown here in Belleville, for example. And I can see all the good things that are happening. I can see the potential there, although I also know it’s going to take time. But there’s so much good that is already happening. It’s great to see,” she said.
And Smith said the family has no plans to move again. Home is where the heart is for Lesley, Jamie and Charlotte, and their hearts are definitely in the Bay of Quinte Region.
“This is going to be our home – this is it! We’re not moving again. We have everything we need here and if you want to go to the bigger attractions or bigger centres like Toronto, Montreal or back to Ottawa, you can do it in a day and come back to this amazing place. We couldn’t be happier.”
– Jim Barber is a journalist and author based in Napanee. Contact him at [email protected]