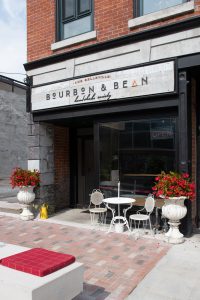 The cafe owners Shane and Cara Poyner were born in Prince Edward County but have recently moved back to the area with dreams of setting up shop in downtown Belleville.

Cafe by day and bourbon bar by night, they describe themselves as a brasserie with a full espresso bar. They have beers on tap, County wines and a full cocktail list created with their own infusions. Sunday brunch, table service lunch and late night pizza are among their specialties. They’re brand new but they are well on their way to making their mark on downtown Belleville.

Handshake society is a term that not everyone is familiar with. Cara described their decision to name the cafe Bourbon and Bean Handshake Society:

“{It’s] something that comes from mine and Shane’s generation. You go to shake hands with someone and they give you a limp handshake, or you go to cheers them at dinner and they don’t look you in the eye.  It’s about reintroducing people, stepping back from your phone and getting back into the art of conversation.”

Having spent many years living in the County they’ve witnessed the lull it can feel during the winter months, recognizing Belleville’s year-round appeal for their business model. 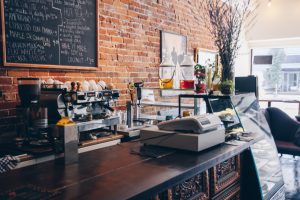 “Belleville just seems to be growing exponentially and its got a younger, fresh vibe; people here aren’t quite as established but it fit our business model and what we’re looking for because we do really want young people who need a place to go. We weren’t sure how things would be. We didn’t hang out much in Belleville before we opened here, but the amount of reciprocation from the community has been really overwhelming. We have people bring us herbs from their garden, it’s crazy, we’ve been totally
embraced.”

As young business owners, the pair has found their own set of challenges. “Everybody has a piece of advice for you. Whether it be an older, more established business owner or someone who’s just older than you and think they know better than you because you’re young. 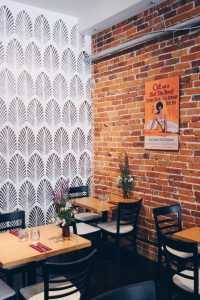 At the same time that’s also a strength for us because we’re not so old and established and full of pride that we can’t stop and ask someone for help.  I would say that there have been so many people that have extended themselves to help us with the menu, or branding or just in service experience and things like that. Even though I worked in the service industry for a while, there’s always more to know and more to learn. I would say that being young is really helpful because I think a lot of people get to a point where they don’t want to ask anyone for help, or they’re not humble enough to ask anyone for help so that’s definitely something we’ve used as a strength.”

Cara and Shane are only getting started: their future plans include a pop-up potluck where you’ll be able to try a myriad of different styles of cuisine. Think: a Pig and Whiskey with an old-fashioned pig roast, alongside specialty whiskey cocktails as well as a rotating series of guest chefs in their kitchen, each creating their own signature dish and cocktail.

Supporting their community is one of their top priorities. You can catch these two at downtown street fairs throughout the summer or visit their space at 281 Front Street. 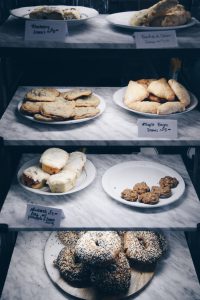 1. The Cara Special:
A long-shot of espresso with one cube of raw sugar served over ice with a float of cream.