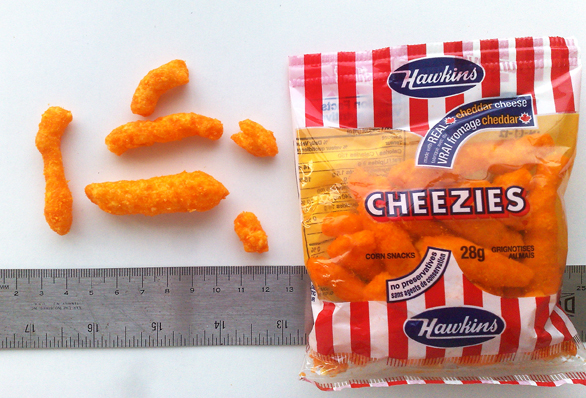 One of Canada’s most popular and iconic snack foods, Hawkins’ Cheezies, is made right here in the Bay of Quinte Region. – Wikipedia photo

You know that you have created an iconic brand when all similar products come to be called the same thing by millions of people.

Much in the same way as people say Kleenex when asking for facial tissue, or Ski Doo when they are talking about snowmobiles, ‘Cheezies has come to be the term Canadians use most when referring to the corn-based, cheese-covered snack food that is often seen in great abundance at family picnics, parties, or in lunches.

As ubiquitous as the term has become it’s only because the product that started it all, the original Cheezies, is still the class of the field and still one of the most popular snack food brands in the nation, defying changes in taste and trends for nearly seven decades.

And it’s made right here in the Bay of Quinte Region. With a year-round full time staff of around 90 people, which blossoms to approximately 130 in the busier summer months, W.T. Hawkins is the family-owned and operated business that created, produced and popularized Cheezies and continues to be an industry leader amongst snack food manufacturers.

And the whole thing basically started from a serendipitous mistake that took place in the years just after the end of the Second World War in the so-called Windy City of Chicago.

“It started with a man named Jim Marker, who passed away three years ago this coming May. He was the inventor of the Cheezie and was our vice-president up until he passed away. He was originally from Ohio and he another gentleman had worked and developed a cheezie-making machine. But it’s funny, I didn’t know the whole story until Jim passed away and everyone got together and was telling stories, but Jim was originally trying to invent a machine that would extrude corn to make cattle feed so it could be stored longer,” said A.J. (Tony) McGarvey, director of finance for W.T. Hawkins Inc., adding that the narrow ‘fingerlings’ of the extruded corn were seen to be perfect for human snacking, once deep fried.

“W.T. Hawkins already had a snack food company in Chicago doing mostly popcorn and had seen this machine and got together with Jim Marker to make snack food. I don’t exactly know when the idea for using real cheese, or cheese at all, happened but I think W.T. Hawkins was always trying different things with his popcorn and just experimented with cheese. However it came to pass, it was a great idea.”

Fortunately for those of us in the Bay of Quinte Region, and all of Canada in fact, Jim Marker was not a fan of big city life and when the opportunity came to develop an operation north of the border, Marker chose the small-town pace of Tweed for the initial W.T. Hawkins foray into the Great White North, building a factory in the community.

“One of the reasons they picked this area was because it was close to the centre of the country, which was close to the traditional ‘corn belt’ of the United States and Canada to make it easier to bring in the raw materials. And being centrally located meant they could ship to either direction across the country with the rail line nearby. So Jim came up here and started the Canadian operation in 1949,” McGarvey explained, adding that not long thereafter there were problems with the home company and it actually closed its doors because of a number of issues, [including the aggressive tactics and intimidation of the Teamsters Union.

It didn’t take long for competitors to start issuing their own types of extruded corn fingerlings coated in cheese, but none have ever seemed to match the flavour and uniqueness of the original Cheezies. And those original Cheezies have also never changed, as the company has never felt it necessary to compromise on its philosophy of creating what is basically a premium brand, high quality snack food.

“I am going to quote Shirley Woodcox who was our general manager starting up in Tweed and then moved down here to Belleville after a fire destroyed the plant in 1956 and the operation relocated here. She used to say that Cheezies are like snowflakes – no two are alike. And I think that, along with the use of real cheddar cheese, is part of why they became so popular and why there is such loyalty to the product,” McGarvey said.

“Some of our competitors would have an extruded snack but they were all identical pieces. Ours is a variable product; some people just love the tiny little bits that are more crunchy, others like the bigger sticks. I really do think the variety of the sizes of the pieces in each bag is one of the selling points.”

W.T. Hawkins ‘accidental’ creation has become a nationwide phenomenon, as it is sold through both major retailers and small mom-and-pop operations.

“We sell to a lot of major warehouses like Loblaws and Wal-Mart and they blow them out to the store levels at more than one brand of their stores. And we also sell to Old Dutch Potato Chips, which is another manufacturer of snack foods and they sell our products off their trucks. That way they make it to the smaller stores which we would never be able to ship to individually,” he said, adding that Western Canada is the biggest territory for Cheezies in terms of market penetration.

“If you look at the Nielsen numbers, we are one of the top 1- SKUs in the snack category in a lot of the major grocery stores out there in western Canada,” he said, adding that the company is currently not interested in selling outside the borders of Canada.

“People who know us in Ontario will go look for us, but we’re not second nature here like we are in western Canada.”

Top comedian Brent Butt of Corner Gas fame grew up enjoying Cheezies as a lad in small-town Saskatchewan. As part of the rider for every booking contract he signs, Cheezies are part of the deal.

“In some of the places he has gone in eastern Canada, like Guelph, they would phone us in a panic because it was in his rider and they couldn’t find them. We would just tell them what stores they’re in across the county. It was funny the first couple of times that happened,” McGarvey said.

And aside from a short period in the mid to late 1990s, W.T. Hawkins Inc. has never tried to expand the product line away from its core product in either design or flavour.

“Back in the 1990s we had a Nacho flavoured Cheezie and it was great and people loved it. But we got so busy that we were struggling to keep supplying our regular customers with regular Cheezies so we had to back out of that idea. We won’t say no to branching out and doing something like that again, but we can’t detract from our core product,” he said.

And W.T. Hawkins Inc., is also steadfast in its commitment to remain independent and family owned. McGarvey said with the recent purchase of Tim Hortons, the company had been the focus of media and industry queries regarding their own status.

“[Current president] Kent Hawkins does not work out of Belleville but he is the third generation of Hawkins to be involved in the company and he is the president. His son Travis is just finishing business school and is very interested in being involved in the business as well.,” he said.

W.T. Hawkins died in 1961, and his son W.W. (Web) Hawkins took over and ran the company for nearly 30 years before his son Kent took over.

“But I would say I probably get contacted once a month by people looking to see if we’d sell. But I think the fact that the Hawkins name is on it and it’s a family business and something that the Hawkins family takes pride in, means things will stay how they are. They are happy with how things are.”

The company also takes pride in the fact that they hold onto employees – another sign of a quality firm.

“At this point as I talk to you, we have 26 people with over 15 years and 12 people have over 30 years with us. Our nighttime supervisor has over 45 years and we had one woman, who left us about five years ago, who was with us for 53 years.”

As long as people snack, and as long as those snackers want a high-quality product, made with the best ingredients, with a taste that is like very few other snacks on the marker, W.T. Hawkins will continue to be an industry leader and iconic brand – all based right here in the Bay of Quinte Region.

–  Jim Barber is a veteran, award-winning journalist and author based in Greater Napanee. Contact him at [email protected]