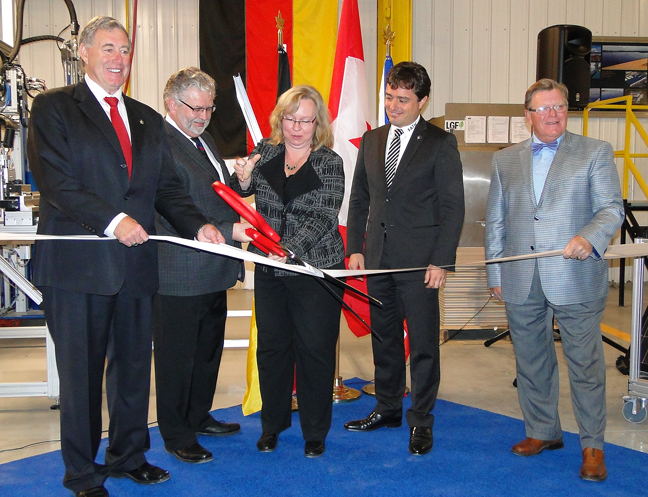 The creation of a new Napanee-based holding company is going to have significant repercussions within the broader Bay of Quinte job market, with at least 180 well-paying high-tech jobs being created, and the promise of more jobs and increased economic activity to come.

At a special press conference held on Friday, Oct. 10, Karl Hollett of Napanee’s Strathcona Solar Initiatives announced the creation of a new multi-national holding company called Strathcona Energy Group. It includes a partnership with FATH GmbH based in Germany, the acquisition of Eclipsall Manufacturing Corporation of Toronto and its 102,000 square-foot manufacturing facility, as well as the acquisition of Mage Solar USA of Atlanta, Georgia, which has a 550,000-square-foot facility in the suburban community of Dublin, Georgia.

And as a corollary to this big announcement, Hollett, who is the co-CEO of the new holding company, also announced the opening of a new 38,000-square-foot plant in Greater Napanee which will be producing the VOLT solar module for both the Canadian and European markets and create 50 jobs

The holding company, spearheaded by FATH’s president Wido Fath, has also purchased the former Nortel plant in Belleville, which will be used as another solar component manufacturing facility alongside a business centre/business incubator for European and Asian renewable energy companies looking to do business in Canada. About 130 jobs will be created there.

Strathcona Solar Initiatives was formed in 2009 by Hollett and his wife Susanne literally in the couple’s garage, and has grown to be an industry leader in Ontario in a short period of time.

Mage Solar USA was already one of the top solar module service providers in the United States and also builds solar modules for a variety of uses.

Hollett said the creation of this vertically-integrated holding company will allow Strathcona Solar Initiatives to become a globally-competitive entity, thanks to the new manufacturing capacity, R&D innovative platforms, and extensive sales and marketing experience of FATH and Mage.

The new Napanee plant, built within the confines of a once-dilapidated steam locomotive repair shop on Enviro Park Lane, has put the community – already enjoying a sort of renaissance, particularly in its downtown core – squarely on the map, to the delight of its mayor.

“Strathcona Solar is a Lennox & Addington County success story and demonstrates that our county is an ideal location for advanced manufacturing. We are very proud of the new VOLT solar module system that will be produced in Greater Napanee and which will service the European market from our community. We are well positioned and have the workforce to compete internationally,” said Gord Schermerhorn, who is also the current Warden of L&A County.

“Today I wish to congratulate Karl and Susanne Hollett on this significant accomplishment. Karl and Suzanne worked extremely hard to build Strathcona Solar into a major player in the global marketplace. We are proud that Strathcona Solar started here in Lennox & Addington County … this is a wonderful example of entrepreneurship and of innovation at work.”

The purchase of the former Nortel building for use as a manufacturing facility again, and as a place that will see innovative new companies from around the world begin to take root and partner with Canadian companies has gone a long way to put salve on the deep wound created when Nortel pulled up stakes a number of years ago.

“Growing up in that area, it was always an manufacturing area. And you look at the Nortel plant and all the money that has been spent on it over the years and we were worried about what was going to happen with it. We were worried about the size of the plant and if there would be a buyer and create similar kinds of job numbers there,” said Belleville Mayor Neil Ellis, who was also at the press conference and spoke to the assembled dignitaries and governmental partners.

“So having a new owner there in the Strathcona Energy Group and somebody who is already bringing new jobs of their own and who are in Europe looking at other European companies to come and set up a hub there … is just fantastic news not only for the City of Belleville but for the region.”

Ellis called it an “exciting” project that has far reaching consequences for the entire region.

“That’s the exciting part – the incubator. It’s going to bring other companies into Belleville where they can have a start up and be able to go into a market that’s a friendly market and join the whole group there, making it a lot easier for expansion, not only in the Quinte area but in Ontario in general,” he said.

“Investing in our community in the long term will pay not only dividends to your company but dividends for the City of Belleville, and I thank you for that.”

For Prince Edward-Hastings MP Daryl Kramp, what the announcement reinforced to him was that the Bay of Quinte region is ripe for growth and development as a high-tech centre of industry and innovation.

“It says that we can be the whole package. We have lifestyle, we have the logistics of being connected very closely to transportation networks throughout the entire North American continent, particularly the high-volume population areas of the northeastern United States and of course the rest of Canada. We have the education, we have the training, we have the workforce and quite frankly I see that now we are setting the stage for a global platform here,” he said.

“And to my mind, once you have success it’s very easy to build on that success. So I see this as really being a lightning strike and what we want to do – and certainly what I want to do – is turn it into a raging forest fire.

Kramp said that one of the greatest assets of the Bay of Quinte region is its people.

“We have got a workforce that is well educated and we have a lot of demonstrated success. If you look at the productivity of plants like Goodyear [in Napanee] and Proctor and Gamble, the have been very, very successful based on the quality of people they have working there,” he said.

“When you have that kind of success word of mouth travels too. People know that there is strength here and it’s not just the capability it’s the attitude. We have people here who want to work, people here who want to provide for their families and want to be able to stay here. I want to be able to say, as a Member of Parliament, to be able to say to our young people, ‘you don’t have to go halfway across the continent. You don’t have to go to the oil sands to get a good job. We are going to be able to provide employment for you here so you can use your talents, your expertise, your capability and inventiveness.’”

For Wido Fath, the old Nortel building totally suits the purposes of the mandate of the new Strathcona Energy Group.

“When we came to this place and saw the possibilities and potential of the building we got very excited because we got the idea to implement an incubator to bring European businesses to Belleville and to use this place as a first step to enter the North American market,” he said.

“And we also got the idea to work together with Loyalist College and make a project with students to build this incubator to attract companies from abroad to come here. And with our own network, FATH is spread out quite nicely around the planet, so we want to bring Ontario companies to Brazil, to Europe, to China or wherever, to sell or somehow bring economic activity from Ontario and Canada to other places around the world.”

Hollett gave a great deal of credit to both the federal government’s Southern Ontario Fund for Investment in Innovation (SOFII) as well as the Prince Edward-Lennox & Addington Community Futures Development Corporation for helping Strathcona Solar Initiatives throughout its development.

“Strathcona Solar is extremely grateful for the remarkable government and civic support we have received on every level of growth,” said Hollett.

“Being able to develop our Ontario-grown company into an operating group with global offices and sales is an immense opportunity for us and a great honour that will also benefit the local, regional and hopefully even national economies.”

In a press release, PELA CFDC board chairperson Angela Miller reciprocated the appreciation.

“PELA CFDC is proud to have supported Strathcona Solar from its launch in 2009. Strathcona’s success in targeting export markets for expansion is an example to other Canadian firms looking to grow, prosper and compete. The 50 new jobs for Napanee and 130 additional jobs in the region will truly make a different in the lives of many in our community. Karl and Susanne Hollett’s entrepreneurial passion and hard work is inspiring.”

–          Jim Barber is a Napanee-based veteran journalist and author. Contact him at [email protected].