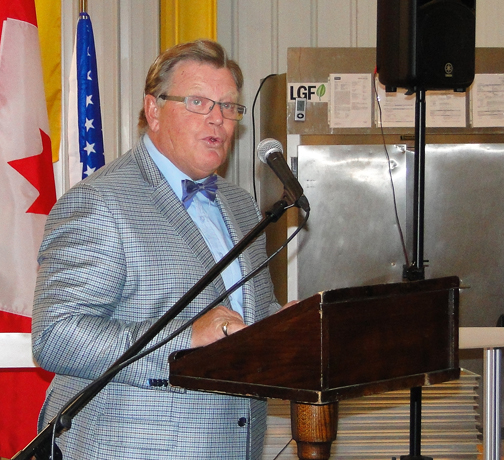 Greater Napanee is in the midst of a true economic revitalization, particularly in its downtown core. And the town’s long-time mayor Gord Schermerhorn is happy to continue playing a part in the community’s growth and prosperity.

Schermerhorn faced a tough test in the October municipal election, winning a fourth-consecutive term by just three votes, but he believes that the voters of Napanee still want a firm, experienced hand on the tiller when it comes to the leadership of the town’s affairs.

“I think my experience played a part in being re-elected. Of course the town has moved ahead in the last 11 years that I have been mayor and people want to see more of that happen. I have worked hard and I think I have accomplished a lot on behalf of the town and I think people see that,” Schermerhorn said.

“There is a lot to do and I am sure people want someone experienced there to do that job. Yes, the race was close, but there were still 6,000 people eligible to vote who didn’t so who knows how that would have changed the results.”

He said that another factor in his favour is that over his more than two decades in municipal politics, including being re-elected to an unprecedented sixth term as warden for Lennox & Addington County for 2015, he has built up a solid rapport with upper-level governments – particularly at the provincial level.

“I think that has been shown in our infrastructure funding in L&A County as a whole, which has done very well. And that plays a part in our own municipal program. There is less and less money available so you have to fight for every dollar that you can get, and at the same time, the projects have to make sense and you have to be able to convince officials that they are worth funding,” Schermerhorn said.

“And we have to be able to lobby the provincial government effectively for things like improvements to the OMPF [Ontario Municipal Partnership Fund – essentially transfer payments from the Ontario government to municipalities]. And over the next four years I think the province has to give us a different way of taxing everybody fairly. So I am hoping to lobby the province for that, which is something I talked about during the election campaign.”

Schermerhorn asseses the economic status of Greater Napanee as being “fairly good”, pointing to the growth of the retail sector and in the number of new restaurants and eateries, as well as the ongoing strength of the manufacturing and entrepreneurial sectors.

“Our downtown is vibrant; stores are opening all the time. We are not totally full but we are certainly close to being full. We also have manufacturing-type companies like GT Machining, Goodyear, Strathcona Solar, Willydogs Hot Dog Carts, Shelin Pools – business like that are doing well and when I see them doing well, then I think the state of our economy is indeed fairly good,” he said.

“And we have a lot of smaller businesses doing well. If they do well in our municipality then our municipality thrives. So we have to encourage those people and help them out wherever we can. And we are also pretty diverse. You have to be diverse; we can’t just rely on the Goodyear plant, even though we do quite a bit. We have to depend on a variety of business for employment and economic activity.”

The mayor said a key strategy in working to attract new residents and homeowners has been to create, develop and encourage the various amenities, special events and activities within the community.

“People don’t necessarily want to live and raise a family in a city any more. They want to live in a fairly small town where they feel safe, but where they can still have the amenities to give them the lifestyle they want. It’s important to have good recreational facilities, schools and medical facilities. We have one of the nicest hospitals in eastern Ontario as far as I am concerned and they are adding more services there all the time. We also have worked on a cultural plan that is coming into play that will add even more amenities to the municipality. I think all of those things are helping us attract new residents and will continue to help us over the years,” said Schermerhorn.

And as for attracting new business and investment, Schermerhorn said he, council and town staff does everything it can to create a welcoming entrepreneurial and development environment.

“This town has always been open for business. Being a businessman myself for many years, I know what it’s like to be in business. As a municipality, we’re trying to cut as much red tape as possible. And personally I try to meet with prospective businesspeople and investors, taking them out for dinner and things like that,” he said.

“We certainly are open for business and we will help them find a location. We really do want people to come to our community and set up a business.”

He said the town has also recently taken over tourism promotion and marketing from the local chamber of commerce and that tourism is definitely becoming an even bigger priority within the town’s economic and community development planning.

“Tourism is about getting our name out there as a town and letting people know that we have lots of lakes, and rivers and other recreational facilities and amenities in the town and in L&A County. I know the county has be working through their economic development people to attract cyclists, geocachers and that type of thing, to bring people into the area. And in my view they have done a really good job,” said Schermerhorn.

“The boardwalk by the river is an attraction; the holiday bright light show is an attraction, as is our farmers’ market and the work we have done encouraging boaters to come up the river. I have often told council that if we don’t have people coming into our municipality, especially our downtown, then the downtown businesses won’t be open for long. We have to attract those people. Yes it might cost some money for the bright lights show and improving the parks and trails, but we have to spend some money in that way to make the town look better and have reasons for people to come here.”

It’s obvious that Schermerhorn has an authentic and deeply-held love for his community and wants to continue to make it an exciting, energetic and fulfilling destination for new visitors, new residents and new business investment.

“Around here a neighbour is a neighbour and a friend is a friend. We help one another out, whether it’s a fundraiser for a family, or a community event. It’s a great place to live because people know one another and we can walk down the streets of Napanee safely. And people support local business too. If you’re reasonable and don’t overcharge people and have good service, people will try to do business in the town one way or another. They won’t go elsewhere if they can get it in town. So there is a commitment there amongst the general public to try and shop locally and support local causes. We have a Town Hall that is open for business, open for visitors and will work to help new and existing businesses. That’s what’s special about this place, in my view,” he said.

For more information on the Town of Greater Napanee, visit www.greaternapanee.com.

– Jim Barber is a veteran, award-winning journalist and author based in Greater Napanee. Contact him at [email protected]