CFB Trenton is the largest air force base in the country and home to over 3,000 staff. Many end up captivated by this waterfront community. Here are three such stories:

Rickie Smith and her family once had cold feet about coming to Ontario. Now they’re content in the Bay of Quinte region, where they enjoy the great outdoors year-round. 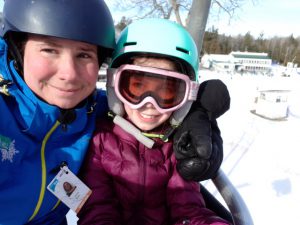 She and her husband, Dean Smith, and kids Torrah and Peyton, moved to Batawa in July 2017. Dean, a member of the Canadian Forces Search and Rescue Unit, had previously been stationed in Newfoundland & Labrador and the Northwest Territories.

“I never wanted to live in Ontario,” Rickie admitted. “I thought it was going to be Toronto sprawl all the way. But then we came [here] and I was so relieved that there was green [space] and small towns.”

The family spent much of last summer outdoors camping and hiking. Rickie now works at Batawa Ski Hill, where her kids often spend time snowboarding and skiing with new friends. Smith likes how the region is situated close to big centres, which allows her family to “go on a road trip in any direction and end up somewhere different.”

Lisa-Marie Guernon is doggone happy about becoming part of the community. Guernon was a member of the Canadian Forces for 16 years, the final eight of which she spent at CFB Trenton, working as traffic technician. 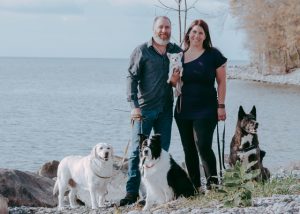 The Montreal native knew she wanted her next career to be here as well. “At the end of eight years I said, ‘I don’t want to get out of here. It’s a great place to be,’” said Guernon.

She’s well-known in the community for her work as a dog trainer and as a motivational speaker. She and her boyfriend Glenn McVeen (a veteran himself ) also use their work with service dogs to speak to veterans who are battling PTSD.

“It’s nice to see all the services that are very connected with people’s health and well being,” she said, noting the region has great parks, fitness and recreational programs.

As a pilot of a Hercules aircraft, Capt. Jeffrey Moorhouse has seen the world. But, he knows there’s something special about the Bay of Quinte: its picturesque parks, its friendly community and the gentle lifestyle.

“A Trenton traffic jam is, what, five minutes?” he said, with enthusiasm. “It’s a quiet, laid-back area compared to a big city.”

He was posted to CFB Trenton from 2006 to 2008 and returned in 2010 as a Captain for its 426 Squadron; he has since nestled into the community with his wife, Victoria, and daughters Madeline and Lauren. 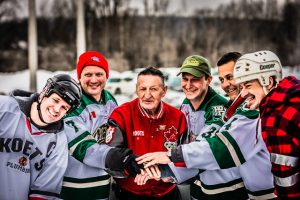 Moorhouse helped found the Batawa Lions Club, which was involved in building an outdoor skating rink that has since led to the CFB Trenton Pond Hockey Classic fundraising tournament. They raised $272,000 for nonprofits in the region’s military and healthcare communities.

As a military pilot his future is, both literally and figuratively, up in the air. But, Moorhouse hopes to remain here for years to come. “You never say never,” he said. “But, ideally, that’s my goal; to stay here for a while.”