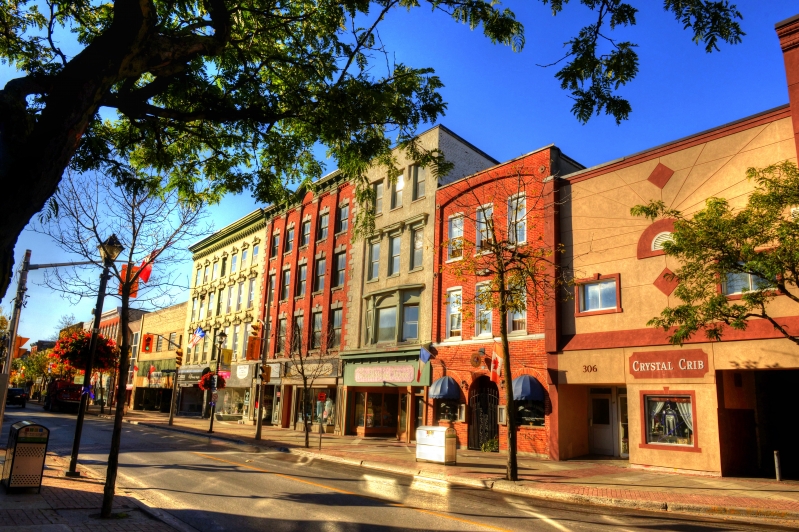 In the not-so distant past, in the days before mass transportation, superhighways, mass-market retailers and the internet, the hub of commercial and social activity of most Ontario villages, towns and cities was its downtown.

All manner of goods and services were obtained in downtowns – food, clothing, hardware and other necessities. Most business transactions with banks, or insurance companies or lawyers took place downtown.

Downtowns were where folks went for an evening stroll, a night out or an important community or civic meeting. Theatres, concert halls, cinemas, taverns, night clubs and even sporting venues were centrally located in the core of most communities.

But for the last couple decades of the 20th century many downtowns suffered from changing retail patterns, changing transportation and communications infrastructure, the advent of commercial nodes near major highways – usually far from the core of a community.

The fallout from these processes was compounded by other factors including absentee landlords, governmental inaction and a lack of creative, innovative ideas so that downtowns, even in the most prosperous regions of Ontario, began to suffer a slow malaise that in some cases became outright deca with vacancy rates soaring.

But since the dawn if the new millennium downtowns have made a big comeback throughout the province, including right here in the Bay of Quinte region. They have once again becoming the lifeblood of our communities.

Community leaders from both the private sector and municipal government have collectively come to realize that a healthy, vibrant, diverse and dynamic downtown core is beneficial to both community and economic development on so many levels.

All stakeholders have come to realize that an active, busy downtown helps fill vacant properties, increasing tax revenue for the municipalities. The increase consumer spending from locals and visitors alike has a domino effect, helping increase revenue amongst businesses outside of the downtown as the merchants will spend more in town, and the new jobs created mean more people spending money locally as well.

Within the Bay of Quinte Region, there are a number of examples of communities that are focussing on downtown or ‘core area’ revitalization as key components in their overall community and economic development strategies.

The Town of Greater Napanee has undergone a true downtown renaissance over the past few years. If you haven’t been to the town for a while you will be pleasantly surprised at the changes, especially and the main intersection of Centre and Dundas Streets, which property owners and retailers have transformed into a high-end, classy destination point. A stroll up and down the three main blocks comprising the downtown core reveals a growing number of unique, funky shops and services catering to an ever growing number of visitors.

The secret to the revitalization is a sense of common purpose between the individual business owners, landlords, the downtown BIA, the Chamber of Commerce and the municipal administration. They have realized that you have to think collectively and collegially. Co-operation is of utmost importance and has let to wonderful beautification projects and an increasing number of special events.

Picton is perhaps the benchmark for how impactful having a unique and dynamic downtown can be on economic development. The focal point of much of the artistic and cultural projects in Prince Edward County, Picton’s downtown is a model for how small communities can leverage their important cultural and heritage assets and create a cohesive message – even brand – that becomes known far and wide.

The downtown is perfectly suited for pedestrian traffic, with an impressive array of specialty shops, artist and artisan galleries and eateries.

To the northwest, Stirling has anchored it’s small by stylish downtown also around specialty shops and unique amenities that cater to the local farming community but also to patrons of the Stirling Festival Theatre, a year-round regional performance venue that draws thousands of visitors from throughout the region and further afield each year.

Stirling’s downtown is a not-so-hidden gem that is quickly becoming a popular stop for travellers.

Although blessed with the economic spinoffs associated with being the host community for one of Canada’s largest military installations, CFB Trenton, municipal and business leaders in that part of the City of Quinte West still understood the importance of creating an enticing downtown.

To that end, from 2007 to 2009, led by the local BIA, Trenton implemented a $2 million streetscape beautification project. Significant time and effort was put into improving the infrastructure downtown, from sidewalks to decorative streetlights to landscaping. This project has gone a long way in improving business retention and growth, traffic into the downtown, as well as civic pride amongst the citizenry.

By virtue of being the largest urban centre in Bay of Quinte country, Belleville also has the most expansive downtown core.

And it’s also in line for one of the biggest revitalization projects in the city’s history, as part of the broader $21 million Build Belleville initiative. This ambitious plan has been in the works for a number of years, but which has finally come to fruition with an impressive number of infrastructure projects set to take place across the city starting in the fall of 2014.

For many years, Belleville’s downtown struggled, but over the last couple of years, spearheaded by some visionary business leaders, developers and municipal staff, that has changed and the City Centre Revitalization component of Build Belleville is the driving force behind this change for the positive.

In the foundation document for the project, the reason for revitalization were outlined clearly and effectively and should be the philosophy behind any community’s downtown revival.

“A vibrant downtown enhances the local economy, quality of life, retains and creates jobs, helps small business, makes better use of existing lands and infrastructure, protects and increases property values – a healthy and vibrant downtown reflects positively on the health and vitality of a city or community,” it states.

The guiding principle is that investment into the downtown will act as a catalyst for private investment in the core. The plan is to increase commercial and residential intensification in the downtown, by providing the necessary services and infrastructure to accommodate the new residents and businesses.

When there are new developments created by private investors that adds revenue for the city to provide and enhance services to all residents. And when the property values rise because of having a more vibrant and active downtown, that also adds to municipal revenue.

New businesses will come and hire from the local labour pool, meaning more dollars in the hands of area residents who will spend the majority of that money within the community. Making the downtown into a place that is highly desirable to live and set up shop is good for not only the downtown, but the entire city.

When a private developer sees the assuredness that the municipality is demonstrating with such a bold plan, it gives them confidence as to the sustainability of the downtown as the key commercial hub not only for Belleville but for the entire Bay of Quinte Region.

With the powerful example of what Belleville is doing, as well as the work that has already happened in Trenton, Stirling, Picton, and the ongoing process in Napanee – just to highlight five of our communities – illustrates the short and long-term benefits of collaborations between multi-faceted groups of community stakeholders, with significant governmental and private sector buy in are obvious.

In all instances, the goal is to increase commercial activity in the downtown core, to increase visitor numbers, increase revenue generation, increase municipal property tax revenues, improve civic pride, all of which will promote residential growth as well as all forms of commercial, industrial, institutional and governmental investment. The payoff for everyone is that a thriving downtown improves the overall quality of life for residents who choose to call the communities of the Bay of Quinte Region home.

Jim Barber is writer for Bay of Quinte Living and former Managing Editor of the Napanee Guide.
Jim lives in Napanee, part of the Bay of Quinte Region.