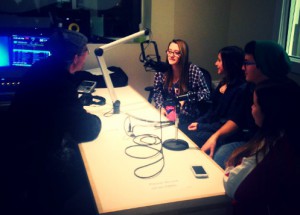 As we walk into the welcoming atmosphere of Miss Lily’s on Picton’s Main Street, I introduce myself to Mel, who I immediately recognize based off of my internet research. On this cold Monday afternoon we’re happy to be sitting down to chat inside this adorable café. We order our drinks (a chai tea latte for myself) and settle ourselves at the back table. I’ll preface this interview you’re about to read by stating that I was extremely excited to find out about this amazing, innovative and ambitious alternative education project happening right in our own Bay of Quinte region! I started with the big question:

Heather: So, how did DARKSPARK come about?

Mel: I was hired by an organization called Learning Through the Arts (LTTA), which is facilitated by the Royal Conservatory of Music in Toronto. They pair up artists with teachers to go into classrooms and teach curriculum using their art form. The program is successful because it’s about way more than just putting your pen to paper – it’s about using your creative mind to make something amazing. My first contract with them was with the Quinte Mohawk School and it was that pilot project that sparked this idea for DARKSPARK in my brain. My partner D’Ari and I developed a really great rapport with QMS and they had us back the next year with our own project. Our program uses songwriting and recording to teach students curriculum – but we also use the program to encourage students to write about issues that affect them personally. It’s been used to write and record songs about everything from science water systems to issues of bullying. Typically our program is 3-10 days, but we had been speaking with the Quinte Mohawk School about the possibility of doing a longer, more in-depth program there. This came to fruition when we received a grant last year through the Ontario Arts Council to do a residency at the Quinte Mohawk School and to work exclusively with the grade 8 class to co-write, co-record and co-produce a fully produced EP on

Heather: How did the kids feel going into this, knowing that they would be writing and recording? Maybe they’re not musical or feel like they can’t sing or do anything like that.

Mel: Yeah, that’s always the really remarkable part of the program. Typically when we go into classes the first thing kids say is, “I don’t sing, I’m not singing…” But then, once we build up trust with a bunch of ice breaking activities, by the end of it they’re totally excited and into it. It’s interesting because it’s always the kids that are deemed to have behavioral issues or [are] challenging that are the ones that really get the most out of it. In this instance, there were a couple kids that said, “This is dumb, I’m not doing this” right from the top, and they ended up being the super stars of the whole program.

Heather: What topics were they writing about, in terms of Aboriginal experiences?

Mel: Well, that was one of the heaviest parts. They really honed in without a lot of guidance on some incredibly timely and challenging material. We had several groups write about missing and murdered Aboriginal women and the impact that has on communities. Our only group of all boys actually decided to write on this topic, which was very moving to me. They wrote about how they felt that it shouldn’t just be a woman’s issue, that it’s everybody’s issue. Their song is just…I can’t listen to it without tearing up. It’s really moving. Several other groups wrote about a general overview of issues affecting Aboriginal communities, everything from the generational cyclical issues of abuse that have transpired… to the signing of the treaties and land rights. One group wrote a suicide note from the perspective of a young Aboriginal person with each verse directed at a different facet of their support system (family, community and country) that has failed them. These songs are not easy listening; they’re very, very challenging and thought-provoking.

Heather: So, once you get through the mixing and mastering and have this EP, you’re going to release it?

Mel: We want to build a bit of momentum behind the project to give the songs as much reach as we can, so starting today (Monday January 26th) we’re releasing the first teaser video. Every week we’re releasing a teaser video and a song. People can pre-order the EP off of the website at www.fourdirection.ca. The official EP comes out in its entirety on March 10th and that’s when all the pre-order sales will be shipped to people.

Heather: Is the money going towards anything?

Mel: The proceeds are going to the Native Women’s Association of Canada’s Missing and Murdered

Heather: How did you come up with that?

Mel: The kids decided that that’s what they wanted to give the proceeds to.

Heather: So you showed the students their songs, you had them listen to it just last week. What were

Mel: I think they were pretty overwhelmed. When we played them their jaws were just on the floor. They kept saying “That was so powerful” and “I just got chills” so they were really impressed and I think it got them really excited. It was an overwhelmingly positive response.

Heather: What stood out to you about the Quinte Mohawk School and the area compared to any of the other areas that you’ve been in for this project?

Mel: Quinte Mohawk School is just an unbelievable school. Kathleen Manderville is the principal there and she’s such an advocate of the arts. She really gives her students every possible opportunity to learn through the arts. You go into that school and every inch of it is painted in these incredible murals and there are a lot of local artists that work there through Ontario Arts Council grants and even without them. It’s just a really special place.

As we wrapped up the interview and got a sneak preview of what is to come (we got to listen to some songs, and they’re awesome!!!) Mel stayed behind to continue working away on DARKSPARK, one of her many exciting projects. Leaving, we knew that this was going to be something big. Be sure to stay up to date with everything that’s going on in the program and how it’s progressing by checking on the DARKSPARK Blog and YouTube channel.