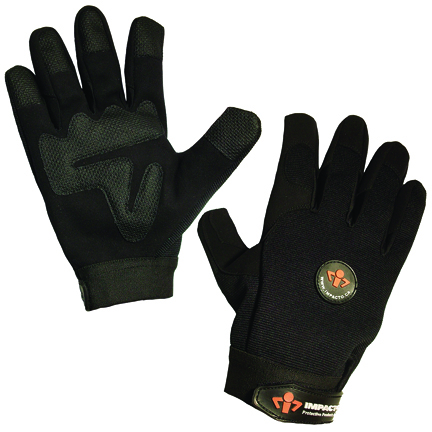 Workers at some of the largest and most prestigious manufacturers in the world are able to do their jobs more safely and with a much lower chance of repetitive stress injury thanks to the innovative products being made and distributed by company right here in the Bay of Quinte Region.

Since the mid-1980s, Impacto Protective Products has designed, manufactured and imported high-quality, premium personal protective products, which are used by assembly line workers around the globe.

Although Impacto produces a broad range of protective and ergonomically-sound items for one’s feet, wrists, knees, back and other parts of the body, it was with its ground-breaking designs for anti-impact and anti-vibration gloves that the company made its mark on a truly international scale within the manufacturing sector..

“The Air Glove is a product that carries a patent on it and certainly within the industry it’s the highest-performing anti-vibration glove on the market,” said company president Eric Lehtinen, who took over from his dad and company/co-founder Ed Lehtinen in the fall of 2013. Ed remains chairperson of the company.

“The main way we differentiate ourselves from our competitors is that most import exclusively. Their entire product line would come from overseas. At Impacto, although some of our products do come from overseas, about 60 per cent of all the products that we sell are still made right here in the Quinte region.

“Ed and Mitch were involved in the nugget of an idea that would become Impacto very early on. They were making one glove which was a simple fingerless glove with a padded palm, selling it into GM in Oshawa predominantly for line workers who were basically using their hands as tools. They would be fitting a panel or part with the palm of their hand because they couldn’t use a hammer,” Lehtinen said.

“That was in 1985 and then my dad made a capital investment and said, ‘yes this is a product we can expand on and we can sell internationally, not just within Ontario and not just within Canada.’ So we became Impacto in 1987, and we’ve had a pretty good run since then.”

What has spurred the continuous growth of Impacto is the company’s steadfast policy of designing and manufacturing as much of the product it ships as possible.

“We we do a lot of in-house research and development. If a large-scale manufacturer or distributor comes to us and says they have a need for a very specific type of glove – say one that can stop vibration on the back of the hand – we can create a prototype in house, make a certain number and if the volume of orders gets to a point where we don’t have the capacity to make as much as they want, then we can look to import it or use our off-shore manufacturing partners,” he explained.

“Because we have the R&D and manufacturing here, we can turn a new product line around in six weeks, whereas it would be closer to six months if you tried to do it overseas. So that allows us to respond very, very quickly to industrial need.”

As well, the company also realized that what could work for a high-end automotive plant in southern Ontario could also work in similar facilities around the world.

“My dad was previously a vice-president for Imperial Oil, so he had been exposed to a lot of different international manufacturing operations and that allowed him to see the global marketplace in a bigger way. That was a perspective I too was fortunate to have gained when I lived and worked out of the U.K.,” he said.

“My father saw that an automotive company in Ontario is based on the same template as automotive manufacturing plants that exist in the United States, Europe, Japan and everywhere else. He thought if we can sell it to GM in Oshawa, we can certainly sell to Chrysler in Windsor, Toyota in Cambridge, Honda in Alliston – and that’s where our global sales started.”

Being flexible and adaptive to changing market conditions also helps as Impacto was able to weather the difficulties in the automotive sector during the most recent serious economic downturn by reaching out to other similar sectors.

“We were very heavily ingrained in the automotive industry and we still are. You would be very hard pressed to find an automotive company worldwide that we don’t sell to, including some high-end ones like Bentley, Rolls Royce, Aston Martin and Land Rover. With the recession we went through in 2008-2009, we were still very fixated on the automotive industry. When big auto started faltering, it forced us to look at new industries and different places to sell our products. By doing that we were able to mitigate some decreases in sales through the recession. We found this whole new customer base. Now that automotive is picking up again, it’s really benefitted us,” Lehtinen said.

“We looked at aerospace not as a replacement but definitely an add-on to automotive, because they are doing a lot of the same work. If you think of the new Boeing 777 Dreamliner, there are millions of rivets on the wings of those planes. Every rivet that goes in uses a tool that creates a significant amount of vibration. Impact and vibration can lead to things like Hand Arm Vibration Syndrome, also known as Vibration White Finger because of the nerve damage. You also have carpal tunnel and other things which can lead to possibly permanent injuries. Our Air Glove and other models can reduce that risk, meaning aerospace and companies like Boeing were a natural fit. Today, you would struggle to find a major manufacturing industry where our gloves aren’t being sold.”

The more forward-thinking companies in the marketplace have come to realize that investing extra money on protective gear at the outset is a far better way to operate than going cheap on protective equipment and hoping for the best. Usually those who choose the latter root find that employee hours lost due to injury, replacement costs for bringing in other workers to fill in and an overall drop in productivity bite into revenues and profits far deeper than the initial outlay for proper gloves or other protective attire.

“I was selling into Land Rover in the UK and they did a huge cost analysis on gloves. They were using a very simple cotton glove with a thick leather palm and each worker was going through two and sometimes three of those a day. We put in an Impacto version of the glove – a simple fingerless glove with a leather palm and our special patented gel polymer. They were finding that those gloves were lasting three weeks to a month and it was saving hundreds, even, thousands of dollars a month. That really helped our sales team get their minds around the fact that, yes, it’s a premium cost, but look at the actual cost savings. I think that’s why we do so well with blue-chip companies like GM and Boeing and John Deere. It’s allowed us to carve out a niche market, within a niche market,” Lehtinen said.

As mentioned previously, besides the hundreds of varieties of gloves, Impacto also provides protective gear for other parts of the body.

“From the gloves we expanded into body protection: knee pads, back supports, elbow pads and supports. We are almost head to toe in terms of ergonomic protection and anti-impact/anti-vibration protection. Some of our most popular products are insoles. We also have something called a Turbotoe, which is a pull-on steel toe cap. So if you’re visiting a plant, you can slip it on over your dress shoes and take them off when you’re leaving the plant. It’s actually our top-selling product at the moment, followed by our insoles,” he said.

“We’re also proud of the fact that the original glove we started our company around is still in our top five selling products almost 30 years later. That speaks to the design and the continued need.”

The company has also been innovative in its use of the internet as a way to market their wares.

“We’ve had a fully-functioning website for over 20 years. We have mobile apps which have video and links to our products. You can download flyers and catalogues directly to your tablet and soon from your iPhone or Android phone. Technology has been important for us in so many ways.”

–              Jim Barber is a veteran, award-winning journalist and author based in Napanee. Contact him at [email protected]