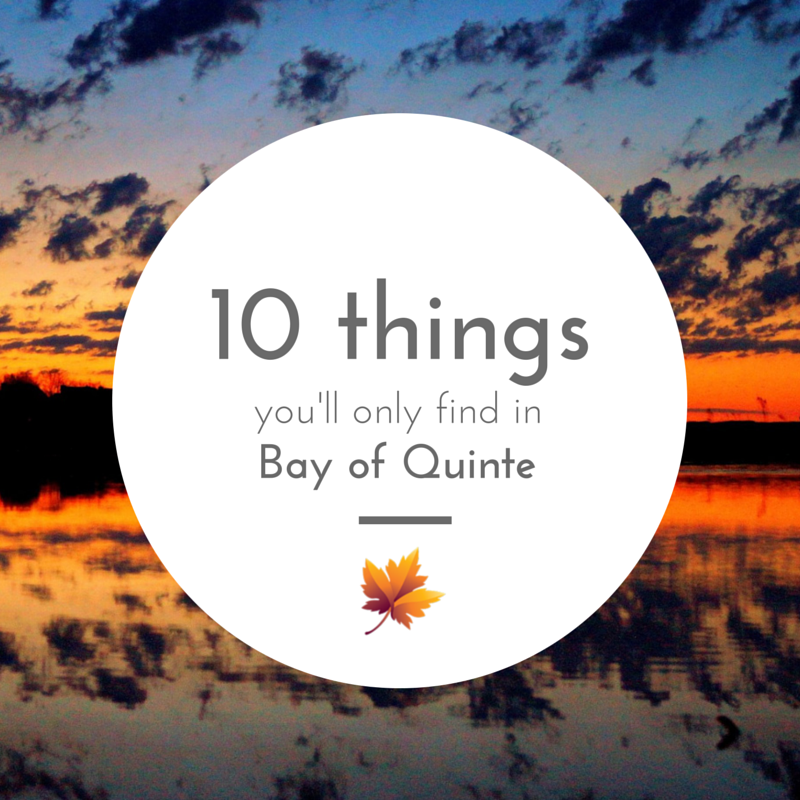 Originating in the northernmost reaches of the region, Hawkins Cheezies moved from Tweed to Belleville, Ontario in the 1950’s. 66 years later, the vibrant-orange snacks still call the Friendly City home. They’re sold across the country, offered in nursing homes and hospitals, and were even a favourite of Canadian comic Brent Butt when he visited Belleville!

As you enter the west side of the Bay of Quinte Region, you’ll be hard pressed to miss your first friendly face. The Big Apple presides over Colborne, just before you enter Brighton-Cramahe township. Known for its apple-growing heritage, this area is also famous for celebrating Applefest on the last weekend of September each year. Find the 401 Cider Brewery for refreshment, and the restaurant and cafe for home baking (get the apple bread, trust).

You may have already known that the Bay of Quinte Region is home to the largest air force base in the country at 8 Wing Trenton. Paying tribute to the city’s heritage, the National Air Force Museum is open year round, playing host to traveling exhibits as well as permanent collections and restoration efforts. This free museum in Quinte West also boasts the largest number of aircraft on static display in Canada in its outdoor air park.

Connecting Belleville, Quinte West, Stirling, Marmora, Madoc, and Tweed (among others), the EOTA is the only trails system connecting municipalities seamlessly for cycling, ATVing, cross country skiing, and snowmobiling. This trails system makes use of historic features like unused rail beds in sections like the Hastings Heritage Trail, and allows travellers to easily hop on and off off for sustenance or an overnight stay in a host of small towns along the way. The trails bisect towns and some spots can even be accessed from personal back yards!

It’s well known around these parts that Elvis is alive and well in Tweed. While it’s said he resides there year-round, visitors are most likely to catch a glimpse during the Tweed Tribute to Elvis Festival, which takes place in August each year. Rhinestone-clad performers compete for the best impression over the course of the weekend, determining who’ll be the King, and who ain’t nothing but a hound dog.

PS: Elvis has also been spotted in Prince Edward County from time to time. Keep your eyes on The Great Waterway’s events, and you just might catch him at The Regent Theatre or Waupoos Winery…

Reaching into the earth at depths of 38 feet, Tyendinaga Cavern & Caves are one of the literally hidden gems you’ll find in the Bay of Quinte Region. This park features a 20,000 cubic foot cavern filled with ponds and passages, and is an estimated 100,000 years old.

Where can you find 5,000 anglers converging on a single body of water for the start of the season? Only in Walleye World, which takes over Quinte West, Belleville, Napanee, and Picton each May as walleye season begins. Anglers troll the waters with the hopes of reeling in a catch that will get them in on $250K in prizes, and then release the fish back to the Bay to swim another day.

No cheese stands alone in the Bay of Quinte region, which has been a major player in the dairy industry since the days of yore. With seven local producers filling out the Cheddar and Ale Trail, it’s only fitting that Canada’s cheese fest makes its home here. During the first weekend of June, you can taste top notch Canadian cheeses from asiago to zwitser, paired with accoutrements crafted right here at home.

Looking across the Bay of Quinte from Massassauga Point, at first glance you might not realize that the conservation area on which you stand is distinct from other points along the water. Massassauga Point is home to a rare Bur Oak Savanna on Alvar. The thick limestone just below the soil surface of this Alvar community leads to pooling in the wet season, and extreme dryness on the other end of the spectrum. This results in one of the most species-rich areas in the world, where you can see rare lichens and moss found nowhere else.

One of only two milking herds in Eastern Canada, Ontario Water Buffalo Company is a unique farm located on the outskirts of Stirling in Hastings County. The herd produces milk used to make mozzarella di bufala, as well as buffalo yogurt and other cheeses. OWBC also crafts handmade meats, like their popular water buffalo summer sausage. The produce is welcomed by the community, which hosts the Water Buffalo Food Festival each fall, where local merchants and chefs “Go Buff” by using the products in a variety of dishes.